“Fantasy Football,” a new film from Paramount+, is here just in time for the holiday season. TheGrio caught up with star and executive producer Marsai Martin as well as her co-star Omari Hardwick, breaking down their filming process, telling stories catered to the entire family and more.

As theGrio previously reported, “Fantasy Football,” from filmmaker Anton Cropper, is a brand new film mixing sports, comedy and heart. The film stars Martin as Callie A. Coleman, an exceptionally smart kid who discovers she can control her dad, who happens to be an NFL player, while he is on the field via a football video game. Martin is joined by Hardwick, who plays her dad Bobby, Kelly Rowland who plays her mom Keisha, and other cast members.

Martin, who not only stars but produced the film through her SpringHill production company, told us the movie was “lots of fun to shoot.” She explained, “It was lots of fun getting to know the cast and crew … without spoiling the movie, we had really big set pieces and different experiences that I’ll always keep in my heart. It’s a very unique, yet needed movie. I think it’s perfect for streaming.”

Sharing similar sentiments, Hardwick explained the need for family comedies made for “the culture” stating, “It’s been a long time since we’ve had something like this. And for the NFL to be involved … to authenticate it? To Marsai’s point, [this is for ages] eight to 80. Everybody can watch it.” 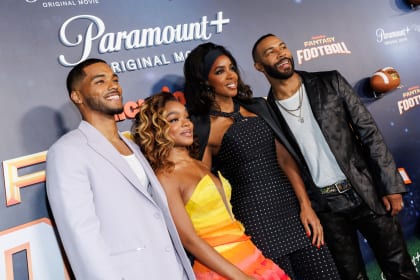 Hardwick also spoke to the role model Martin, who has grown from actress to producer, has become for his own kids. “They’ve become such a fan of Marsai not just as a mogul … also just as an actor. They went back and watched all of ‘Black-ish’!”

While “Fantasy Football” is a very football-centered film, when asked if they’d take this concept and adapt it to another sport, Martin had one answer: “Basketball.” Sharing that basketball star LeBron James is also an executive producer on the film, Martin said, “Because LeBron is attached to it and a partner in crime in this movie … it only makes sense!”