On Saturday morning, Rep. Hakeem Jeffries officially made history as the first African American to lead a major party in Congress.

Hours after Republican Rep. Kevin McCarthy came out victorious in a chaotic, yet historic election to be speaker of the U.S. House of Representatives in the 118th Congress, Democrats are saluting the new minority leader in the chamber: Rep. Hakeem Jeffries.

During the early hours of Saturday after McCarthy won the speakership, Jeffries officially became the first African American in history to lead a major party in Congress. The Brooklyn native delivered a stirring floor speech on behalf of House Democrats before handing the gavel to McCarthy symbolizing the peaceful transfer of power.

In his remarks, Jeffries listed his party’s accomplishments when it controlled both chambers in the 117th Congress, highlighting a COVID-19 pandemic recovery bill and sweeping economic legislation designed to lower medical and energy costs, create millions of jobs and bring manufacturing jobs back to the United States.

“It was one of the most consequential Congresses in American history,” Jeffries noted while standing on the House Dais. “President [Joe] Biden gets the job done, and the ‘D’ in Democrat stands for ‘deliver’.”

Jeffries gave his remarks around the 1 a.m. hour in Washington, D.C. The New York congressman acknowledged his historic rise to leadership in a country he described as a “land of opportunity.” 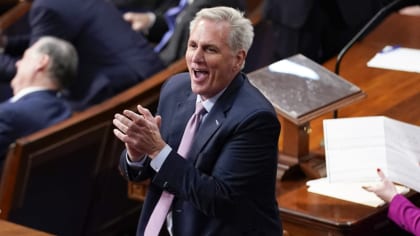 Jeffries received thunderous applause from fellow Democrats during a poetic portion of his speech. Through the use of clever alliteration and every letter of the alphabet, the House minority leader appeared to highlight the contrast he saw between his party and Republicans.

“House Democrats will always put: American values over autocracy; benevolence over bigotry; the Constitution over the cult; democracy over demagogues; economic opportunity over extremism; freedom over fascism,” Jeffries said as he made his way through the ABCs.

One line was a clear reference to former President Donald Trump: “Maturity over Mar-a-Lago,” referring to Trump’s private residence in Palm Beach, Florida.

During the four days and 15 rounds of voting it took for Republicans to decide on who would assume the speaker role, Jeffries was unanimously nominated by his party each time. While Democrats did not have the numbers to elect Jeffries, he is almost certain to make history as the first African American speaker of the House. That is if or when Democrats win back the House majority, certainly a goal in the 2024 election.

Jeffries has emerged as a new and fresh voice of opposition to Republicans after former Speaker Nancy Pelosi, who shepherded House Democrats for nearly 30 years, stepped down from party leadership. Democrats tell theGrio that they are ready to resist the Republican agenda and will lay the groundwork for their opportunity to reclaim power in the House. 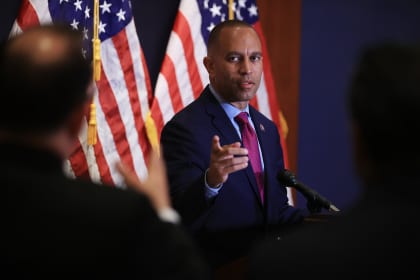 Also Read:
The real winner of this House speaker fight is Hakeem Jeffries

“We’re going to have to fight them every step of the way to keep the government open, to raise the debt ceiling, to fund a government that promotes the general welfare in addition to promoting and protecting the common defense,” Rep. Hank Johnson, D-Ga., recently told theGrio.

However, Jeffries also left the door open for Democrats and Republicans to work together and “find common ground whenever and wherever possible on behalf of the American people.”

Jeffries and Senate Majority Leader Chuck Schumer, also from New York, will lead the Democratic Party in their respective chambers over the next two years as Biden continues to mull over whether he will seek reelection in 2024.

Passing meaningful legislation from the party’s agenda is unlikely now that Republicans control the House. Democrats will instead have to navigate being on the defense as Republicans plan to launch congressional investigations into the Biden-Harris administration. Biden will need the teamwork of Democratic leaders Jeffries and Schumer to make that happen.

White House press secretary Karine Jean-Pierre told theGrio this week that Biden thinks Jeffries is “incredibly impressive” and is looking forward to working alongside him as the new House Democratic leader.

“It’s important to see that type of representation at that level. But aside from that, Hakeem Jeffries is a brilliant thinker, a great legislator,” Jean-Pierre said. “We congratulate him on his new role, and we’ll continue to work closely with him.”