Rev. James Meeks is the first and only senior pastor of the Salem Baptist Church.

After nearly 40 years as a pastor in Chicago, James Meeks delivered his last sermon on Sunday at the Salem Baptist Church, the largest African American church on the South Side.

“I married you all. I blessed your babies. I’ve been to your kid’s graduations. We’ve been together all seasons,” Rev. Meeks told his congregation on Jan. 8, ABC 7 Chicago reports. “I’ve been at the hospital when you miscarried. I’ve been at the cemetery when you buried your loved ones. We’ve done life together.”

Meeks reportedly founded the church in the mid-1980s and today it boasts at least 20,000 members, theGrio previously reported. After 38 years of service, Meeks retired Sunday, and Charlie Dates was named his successor as senior pastor, according to the Chicago Sun-Times.

Rev. Meeks is the first and only senior pastor of the church. He announced his plan to retire in June 2022. 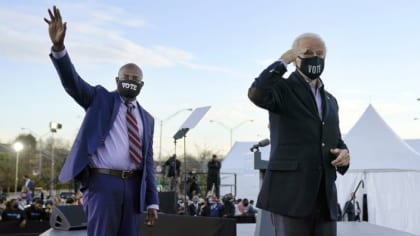 “I leave you. I’m out. Peace out. But I leave you in the hands of the Lord,” Rev. Meeks said during his sermon on Sunday. Chicago Mayor Lori Lightfoot, Rev. Jesse Jackson Sr., and several other dignitaries were on hand for the day of tribute.

“Pastor Meeks has done untold good not only here, but also in this community, our city, our state and our nation,” said Mayor Lightfoot from the pulpit.

“James Meeks has been there for me in my toughest times, in my darkest moments. He has reached out and personally lifted me up,” Lightfoot shared, The Chicago Sun-Times reports.

From 2003 to 2013, Rev. Meeks served as a state senator and ran for mayor of Chicago twice. When he withdrew his candidacy for mayor in 2010, the reverend called on the city’s “divided” Black community to rally together and “speak with one voice” at the voting polls, theGrio reported citing The Associated Press.

“My friends, I come before you today to say that our city — and our community — is divided,” Meeks said in a statement at the time. “As long as our community remains divided and splintered — to the specific advantage of the front-running, status quo candidates — we will never see things improve. We need to speak with one voice.”

Rev. Meeks reportedly plans to continue his work in religion and politics after stepping down from the pulpit.

“I’m happy that we are able to celebrate him when he’s alive and well and can hear all the lives he has touched, especially mine,” said longtime church member Wendy Howard on Sunday, ABC News 7 reports.