On Jan. 20, 2021, President Joe Biden and Vice President Kamala Harris were sworn into office and ushered in a historically diverse administration that vowed to advance equity and even the playing field for Black and other minority communities. The Biden-Harris administration officially reached the first half of its first term on Friday, or the two-year mark.

The occasion comes after historic legislative wins, including the American Rescue Plan (ARP) that rebounded the U.S. economy from the COVID-19 pandemic, but also amid court battles blocking programs like the Education Department’s student debt relief program. It also coincides with a newly empowered Republican Party in the U.S. House of Representatives and the recent controversy over Biden’s possession of classified documents.

Black Americans are more represented than ever in Washington, but challenges remain for the community from the economy to police brutality and voting rights restrictions. So how should Black America grade the Biden-Harris administration for its work thus far?

How should Black Americans grade the Biden-Harris administration?

Poltical scientist and author Christina M. Greer told theGrio that she believes Black America should give the Biden-Harris administration a “solid B-minus.”

Greer, a contributor at theGrio, said in many ways “we’re going in the right direction [and] we’re trending up.” However, the Fordham University professor offered caveats. “We still have some questions about criminal justice” and “there’s still a lot of questions Black Americans have about the copious amounts of money, billions upon billions of dollars that we’ve been able to find for Ukraine, but not necessarily for Black communities when it comes from everything from transportation to housing to the environment to education in schools to colleges.”

U.S. Rep. Jim Clyburn, D-S.C., the Democratic assistant House minority leader and a close Biden confidant, said he thinks the president “earned a big A.” Clyburn, who famously revived Biden’s 2020 presidential campaign when he endorsed him ahead of the South Carolina Democratic primary, said the administration “passed more progressive legislation than any administration since [President] Lyndon Baines Johnson’s Great Society back in 1965.”

The 82-year-old longtime congressman pointed to key legislation like the ARP, the Infrastructure Investment and Jobs Act, the CHIPS Act as well as the Inflation Reduction Act, which brought millions of jobs into the United States and created new jobs. Also, it will soon bring down the costs of health care and energy bills, among other cost-saving measures. 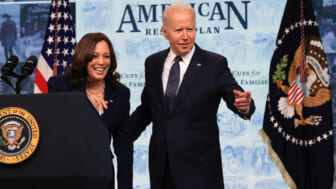 “Just look at where we were when he took office two years ago. This country was engulfed in this worse health care crisis in over 100 years. COVID-19 running rampant,” Clyburn told theGrio. “The American Rescue Plan opened up schools, reopened businesses and got support to mom-and-pop operations, as well as big corporations to get people back on their feet and put cash in people’s pockets.”

Similarly, U.S. Rep. Maxine Waters, D-Calif., said Biden gets a “good rating” from the Black community because he “met all of the promises that he’s made.”

The veteran congresswoman praised Biden’s handling of COVID and his accessibility. “He has been fabulous on dealing with the pandemic and making sure that we have not only PPP, but all of the equipment … needed by our frontline workers,” Waters told theGrio. “He has lived up to his promises to not only work with the leadership of the Black community … [but] he’s shown up in our communities.”

How impactful is diversity in the Biden-Harris administration?

The federal government under Biden is undeniably diverse. There are currently seven African Americans in the president’s cabinet, including Vice President Kamala Harris and many Black Americans remain heartened that Biden appointed Ketanji Brown Jackson as the first Black woman on the U.S. Supreme Court. Greer said the “descriptive” and “substantive” representation of African Americans in key positions gives the Biden-Harris administration a “boost.”

Greer also thinks Biden’s nod to Historically Black Colleges and Universities (HBCUs) and Black fraternity and sorority organizations, “and the contributions that they continue to make in all policy sectors of the country,” is significant.

Clyburn noted that the Biden-Harris administration’s historic elevations of Black Americans, particularly on the federal bench, is no “window dressing.”

“Putting African American women on the various courts of this land — more on the courts of appeal in one swell swoop than all the presidents before him combined — that’s not window dressing,” said Clyburn. “That is the most substantive thing you can do. Put in people who are fair, people with the backgrounds and experiences that these people have on the courts … it will last for many lifetimes.”

When Biden tapped Harris as his vice president, Greer said it signaled to Black Americans “another groundbreaking way that Joe Biden and the Democratic Party would welcome in Black Americans to some of the most elite levels of governance.” However, she noted, “Kamala Harris was missing for a lot of Black people for a very long time and they were wondering what she was doing, what she was being utilized to do.”

Some of the vice president’s portfolio, from voting rights to migration, were a “trap,” Greer said. “You have the child of two immigrants being sent to the border telling immigrants not to come. So even the visual of that was not great,” she said.

Greer added: “I think a lot of people obviously appreciate the HBCU and Divine Nine aspects of her work. But I do think that a lot of folks want to see her out more.” She acknowledged that Harris is “being utilized more in these last few months” than in the beginning of the administration’s term. For instance, her most recent work on reproductive rights and climate issues. 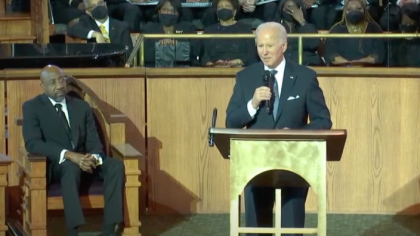 Greer also said Harris and the Biden administration can’t completely be faulted for the perceptions of the vice president’s role because “there’s no blueprint for any vice president.”

She pointed out differences between administrations over the years, from Vice President Dick Cheney being in the “shadows” of President George W. Bush to President Barack Obama utilizing then-Vice President Biden as an effective “confidant” to “put him in communities where he thought Joe Biden would be able to articulate his message best, especially when he’s pushing forward Obamacare to certain Rust Belt communities and blue-collar white communities.”

“Joe Biden’s obviously utilizing [Harris] with Black communities … and female communities obviously on particular issues, but how can he best use Kamala Harris for his overall vision?” Greer asked.

She continued: “What’s helpful for Joe Biden is when he nominates … and is flanked by Ketanji Brown Jackson and Kamala Harris, it is a very prominent visual of Joe Biden as a man who has selected two very qualified Black women in extremely important positions that are … going to change how our politics and policy are moving forward.”

Crucial legislative pushes for police reform and voting rights protections failed during the first two years of the Biden-Harris administration despite efforts to maneuver around the U.S. Senate filibuster that Republicans used to block the advancement of certain legislation. Those constraints are something Greer said “a lot voters don’t fully understand.”

Clyburn said Democrats “never controlled the Senate” given the 50-50 split in the upper chamber in the last session of Congress, which meant that Senate committee votes were also tied. “We had a lot of things that we didn’t get done because we were tied,” he said.

In the absence of congressional action on policing and voting rights, Biden instead signed very limited executive orders. As Greer pointed out: “As we saw with Donald Trump, [executive orders] can be turned down by the Supreme Court” and “need to be used strategically.”

She added, “You don’t want to just keep giving out executive orders because they do definitely lose their power. And it’s up to other states in how they implement those executive orders and how it plays out.”

Clyburn said there are some signs of hope for Democrats, who have seen court wins in red states like his very own South Carolina. A federal court ruling earlier this month concluded that the state’s redistricted congressional map discriminated against Black people, ordering Republicans to redraw the map by March. “We’ve seen the same thing happen in Alabama and Louisiana,” said Clyburn.

“So let’s keep working and stop harping on what we didn’t do. That’s behind us. Let’s work on getting the house back, keeping the Senate, maintaining the White House and do what is necessary to increase our numbers in the United States House of Representatives.”

While the United States and the world economy continue to deal with inflation, the Biden-Harris administration has continuously touted the current low unemployment rate — which reached a low of 3.5% in December — and some of the measures of the Inflation Reduction Act. But for Black Americans, unemployment remains disproportionately higher at 5.7%. What’s more, Black Americans continue to be impacted by racial gaps in wages and education.

“I don’t know if we’re ever going to have a president that actually fully addresses it. We obviously didn’t see it with Barack Obama and we’re not seeing it with Joe Biden,” Greer told theGrio. “To really address the inequities that African-Americans experience on a daily basis, we are going to have to change every single institution in our country.”

Greer pointed to “decades-long inequities” like the 1944 G.I. bill, which excluded Black veterans from major benefits such as loans for housing. Instead, she said African Americans “were redlined out of particular communities” and their neighborhoods have been left “undervalued.” Last week, the Biden-Harris administration notably announced new efforts to address racial bias in housing appraisals.

Biden’s economic agenda and its impact on Black communities

“Democrats are trying to at least start the conversation in ways that Republicans absolutely refuse,” said Greer. “But it seems in a lot of ways that we’re trying to put a Band-Aid on a massive, gaping wound that has been the origins of anti-Blackness in this nation.”

Clyburn said Biden’s economic agenda, the bills that he and his Democratic colleagues in Congress passed “made a dent” in the struggling Black economy, but “not a big enough one.” He explained, “A lot of people who went back to work were not able to go back to work in the same capacity at the same income levels that they were before.”

The Inflation Reduction Act is intended to bring the needed ease to the pocketbooks of Black Americans, said Clyburn. “[We’re] capping the spending on health care. So if you’re going from spending $800 a month for insulin down to $35 a month for insulin and if you cap that at $35 a month, you are helping to enhance the wealth of that family,” he added.

“We’ve got much more that needs to be done, Clyburn conceded. “No question about that.”

Gerren Keith Gaynor is the Managing Editor of Politics and White House Correspondent at theGrio. He is based in Washington, D.C.