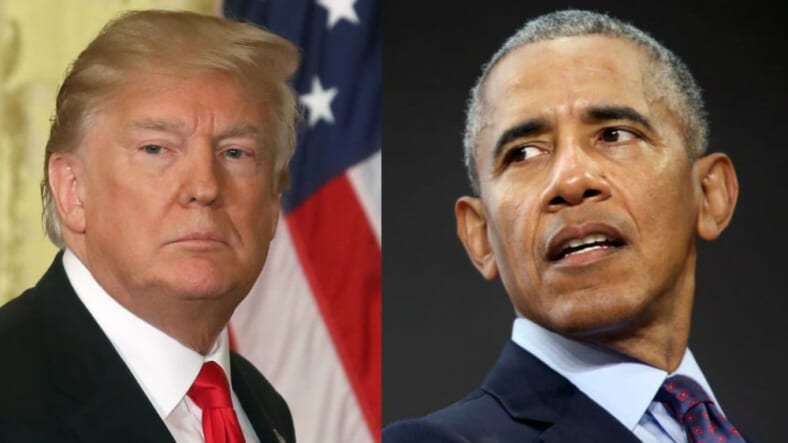 President Donald Trump tried to find a way to blame Barack Obama for the fact that he had to cancel his London trip.

Trump was scheduled to go to to the UK next month to open a new embassy in South London, but amid a wave of protests and calls for him to be barred from the country, he ultimately cancelled the trip.

But somehow, Donald Trump managed to make it about Obama because well… Trump.

“Reason I canceled my trip to London is that I am not a big fan of the Obama Administration having sold perhaps the best located and finest embassy in London for ‘peanuts,’ only to build a new one in an off location for 1.2 billion dollars. Bad deal. Wanted me to cut ribbon-NO!” he tweeted late Thursday night.

Reason I canceled my trip to London is that I am not a big fan of the Obama Administration having sold perhaps the best located and finest embassy in London for “peanuts,” only to build a new one in an off location for 1.2 billion dollars. Bad deal. Wanted me to cut ribbon-NO!

–LET’S BE CLEAR: Donald Trump is the REAL shithole–

Here’s the problem with that #fakenews, though: the embassy move wasn’t actually made under President Obama. It was made by George W. Bush, as the New York Daily News pointed out.

Robert Tuttle, the ambassador appointed by Bush, defended the then unpopular decision to move the embassy as the result of a “long and careful process.”

Back in 2008, Tuttle said, “We looked at all our options, including renovation of our current building on Grosvenor Square. In the end, we realized that the goal of a modern, secure and environmentally sustainable Embassy could best be met by constructing a new facility.”

Sadiq Khan, the mayor of London, has since released a statement about the trip’s cancellation.

“It appears that President Trump got the message from the many Londoners who love and admire America and Americans but find his policies and actions the polar opposite of our city’s values of inclusion, diversity, and tolerance,” Khan wrote.

“His visit next month would without doubt have been met by mass peaceful protests,” he continued. “This just reinforces what a mistake it was for Theresa May to rush and extend an invitation of a state visit in the first place.”

“Let’s hope that Donald Trump also revisits the pursuit of his divisive agenda.”

Massive protests ahead of Trump’s visit

Last year, when Prime Minister Theresa May came to the US, she invited Donald Trump to London. But after Trump retweeted three anti-Muslim videos from a far-right British group called Britain First, activists in the United Kingdom threatened to stage the “biggest demonstration in British history” if he did visit.

May herself chided the president over the videos, saying, “The fact that we work together does not mean that we are afraid to say when we think that the United States have got it wrong and to be very clear with them.”

“I am very clear that retweeting from Britain First was the wrong thing to do,” she said.

And about that royal wedding

There’s speculation swirling that some British officials are concerned that Prince Harry may want to invite his friend Barack Obama to his wedding to American actress Meghan Markle which could be viewed as a slight by Trump.

The wedding, which is scheduled to take place in May, is sure to be attended by heads of state around the world. To be fair though, Prince William didn’t invite then President Obama to his wedding to Kate Middleton so there is a precedent for excluding Trump from the guest list.

The White House hasn’t yet commented on whether an official state visit London will be rescheduled.