The actress dishes on her important, inspiring, and instantly addictive role in the electrifying Superhero series 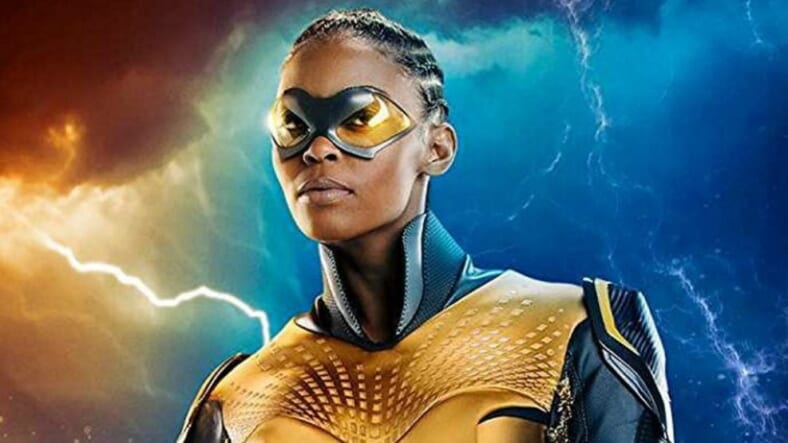 It’s rare that a network known for angst-ridden programming for teens delivers a drama series as inspired, important, and entertaining as the CW’s electrifying new show, Black Lightning.

The long-awaited, DC-Comics-based series helmed by Salim Akil and Mara Brock Akil raked in huge ratings on Tuesday night, delivering the CW’s biggest debut in two years. Scoring an impressive 0.8 in the coveted 18-49 demographic the compelling new series was also a trending topic on social media.

The show’s premise centers around Jefferson Pierce (played by Cress Williams), a well-loved high school principal and family man who also has a secret past as the infamous Black Lightning. Even though he hung up his cape nearly a decade ago the father of two dynamo daughters is called back into action when their lives are threatened.

TheGrio caught up with actress Nafessa Williams to dive deep into her character of Anissa Pierce/Thunder, a teacher and activist who discovers she is a superhero on the mind-blowing new series.

The 28-year-old actress (Code Black, One Life To Live) says she closely identifies with her Black Lightning character’s journey and revealed the two things that immediately drew her to the groundbreaking project.

“I was in from the start because Mara and Salim were attached to it. They’re a force. They’re creating authentic, dynamic characters who are relatable and have depth and are perfectly flawed and I’m just honored to be a part of a project that’s making history and being a part of the change,” she says.

“I have always been a huge fan of their work and the stories that they tell so I was on board before I even realized the magnitude of what Black Lightning meant. I knew with them at the helm of all of this that we would be safe and it would be authentic and the characters would be strong.“

One of the most compelling aspects of Black Lightning is how real the relationships seemed to viewers from jump.

According to Nafessa, one factor that’s responsible for the seamless depiction of a real black family is the cast’s genuine love and respect for each other.

“It’s a real thing. There was just a connection with all of us. I’m honored to play opposite Cress [Williams] and I love being his onscreen daughter. He’s an awesome person to be working with. The admiration translates to our characters onscreen,” she admits.

EXCLUSIVE: Cress Williams talks ‘Black Lightning’ and how you can be a real-life superhero

The relationship between Anissa and her on-screen sister, Jennifer is both realistic and relatable. Nafessa insists it’s due to the same real-life love between her and actress, China Anne McClain.

“We had instant chemistry. That genuine adoration for each other—kudos to the casting team because we honestly look like a real family. We spend time together on screen and off. The minute we met each other it felt like she was my sister. It was magical. There was a knowing between us. This is something that you can’t force,” she gushes.

“I have a sister who is 16, the same age as Jennifer on the show. In real life, I am that big sister, I am that protector, I am the one to lead the way so it was cool to share that side of myself with my character.”

Although Anissa is a confident, outspoken, empowered woman, she will face struggles she never conceived of when she realizes she has superpowers she knows nothing about.

“Basically, Thunder is discovering who she is, not only as a woman but as a superhero. Over the first two episodes, she’s realizing [she has] these powers and she’s discovering them but there’s gonna come a struggle with that because she’s not understanding it,” she explains.

“As she’s discovering her superpowers, you’ll see her researching things while keeping this a secret because she’s wondering, is this something you share? Are people going to believe you? What will they think? My parents are not gonna be with this. So she has all of that in her mental space and how to overcome it and how to navigate through it.”

Many of Thunder’s experiences allow the character to fill a representation void for many groups who are seldom explored on the small screen.

The character’s journey mirrors that of many LGBTQ youth across the country and that fact is not lost on Nafessa.

“It’s the same journey. You discover something about yourself and you have to figure out how to bring it out into the open. The thing about Anissa is she is bold as hell and she lives her life unapologetically and she has been out as a lesbian since she was a teenager and her parents accepted it,” she says.

“I think it’s really important for parents of teens to watch that and see how Anissa’s parents are open and accepting of her sexuality. Hopefully parents of LGBT youth can be inspired by that. Suicide is a huge problem for gay and lesbian teens and I’m so glad to shine a light on something that people need to see.”

Their Black Is Beautiful

“It’s necessary at a time like now when everyone is changing the way they look and wanting to follow the trends of so-called beauty. It feels like no one is cool with being themselves anymore,” she says.

“We’re all different shapes, color, sizes and we are perfect just the way He created us. We have that magic. That magic comes from our beauty. Our magic is our strength and that’s the message—to embrace our brown skin and embrace our natural hair and embrace our bodies—all of that.“

Nafessa hopes to be a positive example of beauty for black and brown girls.

“It’s about showing that black girls can wear their hair natural and use minimal makeup and be beautiful and showing it with such strength.”

Say Yes to the Costume

When it came to the visual element of Black Lightning, its creators certainly carried the loaded through lines to costuming.

“OMG. I cried the first time I put it on. It was so emotional because I have never had a superhero who looked like me. Realizing that I was about to become that for little black girls everywhere was overwhelming. It was a moment for me. It’s super dope,” she says.

“I love that they embraced my body and showed the shape of what a black woman looks like. Our costume designer, LJ, put a spin on Black Lightning’s costume and gave it a feminine touch, but it’s still practical. When you see the costume, it’s strong and it looks like I’m ready as opposed to it being a dress or some kind of sexy look you can’t kick ass in. Thunder is really ready to kick ass and take names,” she says.

“It’s a process to get in it. It’s pretty comfortable for the most part. There are a lot of layers and pieces you have to put on so it takes about 20-30 minutes to get all the way into the costume. It doesn’t look like it’s for play. It’s a tactical suit. I feel like I have my armor on when I’m wearing it. Sometimes we are in it for 12 hours at a time.”

The long hours were well spent because the end result is as important as it is entertaining.

“Black Lightning is for us, by us. It’s about telling the authentic story and for kids in the inner city to be able to turn on the TV and see themselves is so important,” she says.

Black Lightning airs Tuesday at 9pm on The CW.