Donald Trump Jr. says his dad can’t be racist because there are pics of him with rappers

Someone tell him taking a few snapshots with Snoop and Kanye doesn't gives you zero cred. 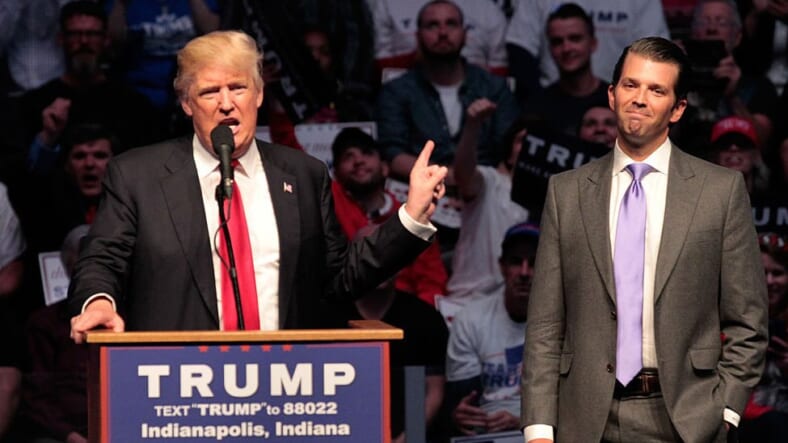 Donald Trump introduces his son Donald Trump Jr. as he addresses the crowd during a campaign rally at the Indiana Farmers Coliseum on April 27, 2016 in Indianapolis, Indiana. (Photo by John Sommers II/Getty Images)

Donald Trump Jr. doesn’t think his father is a racist, because he’s got pictures with Black people.

Yes, you read that correctly. In an interview with the Daily Caller, Trump Jr. said that the Democrats do a “disservice” to those who “are actually oppressed and hurt by real racism” when they call people racist too quickly. And, there’s no way his father could ever be a racist because he actually knows some Black people.

Trump Jr. certainly seems to think that his father is among those being unfairly accused by the quick-to-judge Democrats.

READ MORE: THE STORY OF A DREAMER WHO HASN’T LOST HOPE

“I know him. I’ve seen him my whole life. I’ve seen the things he’s done. You know it’s amazing — all the rappers, all his African-American friends, from Jesse Jackson or Al Sharpton. I have pictures with them. We say ‘Hi.’ Have always been friends,” Trump Jr. said.

It’s true that Trump has taken pictures with rappers like Snoop Dogg and Kanye West, but that doesn’t really constitute “all the rappers.” Unless those are the only rappers that Trump Jr. knows.

It’s also true that Donald Trump does have a long relationship with Jackson and Sharpton, but on Tuesday, Sharpton responded to Trump Jr.’s comments by saying that Trump had changed in the decades since they first met.

“We haven’t changed. He changed,” Sharpton said. “And what he’s changed to become is one who has proposed some of the most racist, bigoted policies. When he was talking right, we took pictures with him and welcomed to him to our events. When he went left, we stood up for what was right. He is promoting racism.”

READ MORE: A WHITE COLLEGE STUDENT’S GUIDE ON HOW NOT TO BE RACIST

Even though he has always refuted them, allegations of racism have plagued Trump for years. As a realtor in the 1970s, he was accused of giving special treatment to white renters over African Americans who wanted to live in his buildings. He has also been accused of treating his Black casino employees poorly. A former employee recounts once overhearing Trump criticize a Black accountant saying, “Black guys counting my money! I hate it. … I think that the guy is lazy. And it’s probably not his fault, because laziness is a trait in Blacks.”

Most recently, Trump spawned the birther movement and kicked off his presidential campaign by calling Mexicans rapists. Add the President’s comments last month where he referred to Haiti and African nations as “shithole countries,” and you’re simply adding more fuel to a long-standing burning bush.