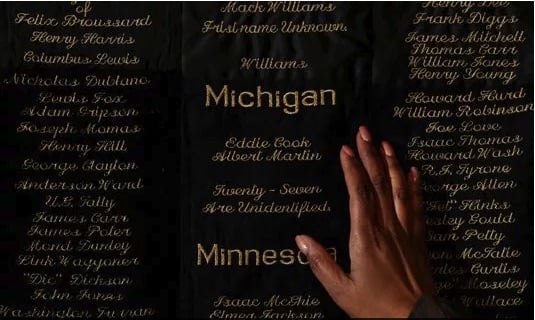 April Shipp’s “Strange Fruit” is a 10-by-10 foot piece of fabric that beautifully and richly commemorates the lives of those she calls “my 5,000 souls.”

Shipp’s tribute to lives lost to lynching debuted this past Sunday amid 60 other colorful quilts. The annual display takes place every February at the church of Detroit Unity Temple.

Onlookers were reportedly drawn to the Strange Fruit quilt due to its unique design using black and gold colors. But as visitors to the exhibition drew closer, the Detroit’s Free Press explained, they found that Shipp’s piece was even more powerful than they had expected.

The Strange Fruit quilt has within its fabric the hand-stitched names of over 5,000 African-Americans who were murdered by noose hangings, tree beatings, burned alive, and other horrific means between 1865 and 1965. Compiled from news stories and history books, Shipp painstakingly acquired each name that she could find and then etched them in script with needle onto the quilt.

The quilt names each victim by state, such as “Michigan” and “Minnesota,” and places names near each other that were related. It’s a reminder that brothers were hang with their sisters, fathers and mothers with their children, friends among friends. These Black people were not just names, but beings who thrived in the world and had purpose.

The Strange Fruit quilt also accounts for the names of lynching victims that were unknown as well. One distinct placement belongs to “27 unnamed victims,” which— as Shipp notes on the quilt— included 25 African-Americans who were killed by racist mobs and Detroit police during the race riots in 1943.

The tradition of quilting, and the deeper message behind it, is one in which the church is proud to continue.

“…a lot of times used this to send a message – that’s why we have several, what we call, protest quilts in this show,” said Shirley Phillips-Horne to the Detroit Free Press. At 80 years old, Shirley is both a church member and longtime co-organizer of the quilt show.

Shipp’s quilt, named after the famous song by Billie Holiday, “Strange Fruit’” – a Century of Lynching and Murder, 1865 to 1965’” was a hauntingly beautiful tribute to Black History Month.