The Emmy-nominated actor opens up about his personal relationship with Tupac and his portrayal of Officer Daryn Dupree. 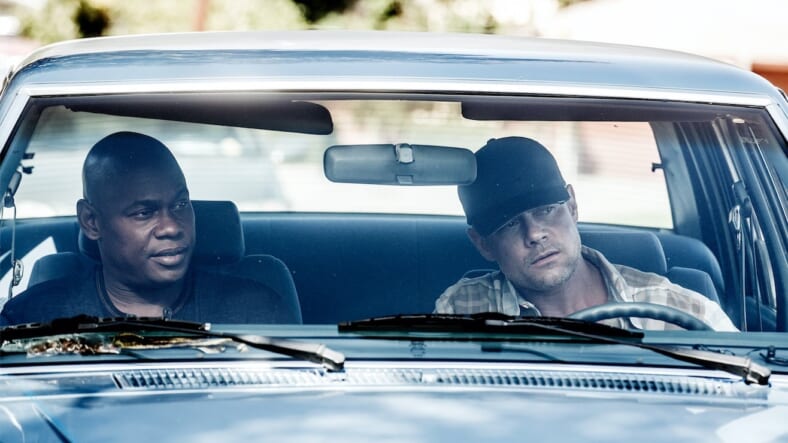 Bokeem Woodbine is having a moment.

The Emmy-nominated actor is back on the small screen playing a role he never imagined he would— but before we get to now, let’s go back a couple of decades.

Woodbine first met Tupac Shakur in 1994 at a premiere event for the film, Jason’s Lyric in which he portrayed Jason’s younger brother, Joshua, who was recently released from prison.

The two forged a friendship and Pac soon asked him to star in his music video for “I Ain’t Mad At Cha,” and then they reunited again for the 1996 flick, Gridlock’d. Unfortunately Tupac was killed before the film was released.

“When I learned Pac was dead I was really hurt for a minute,” he says. “I remember thinking, How are we supposed to live in a world without Tupac? People still have a hard time accepting that he’s gone. He meant so much to some people and he still does.”

Now, Woodbine is starring in USA’s 10-episode crime series, Unsolved: The Murders of Tupac and The Notorious B.I.G. as Officer Daryn Dupree, the man who spearheaded the case’s investigation in 2006 and continues to be the custodian of the still open case.

The actor is no stranger to big projects. His role of Mike Milligan in FX’s hit, Fargo, earned him an Emmy nomination in 2016 and he followed that up with a stint on the ill-fated but fantastic series, Underground. Still, the Unsolved series presented a major challenge for Woodbine.

“I can’t even describe the level of stress that I experienced when I started working on this project. I had to really ask myself if I was up to the challenge and how far I was willing to go,” admits Woodbine. “I was willing to do whatever it took to bring it for this project. I’m glad I stepped up but it was definitely not easy.”

“Anthony Hemingway is a very unique individual and he really works harder than most. One of the reasons we’re blessed for having him as a leader is he can play every position. He’s not asking anyone to do anything he hasn’t done himself at some point so that gives the people that work with him a certain confidence and also creates an environment where you push yourself hard because your leader is working so hard,” says Woodbine, who admits he was shocked when Hemingway offered him the part.

“I couldn’t believe it. I had never been cast in a role like that. He described it as someone who was a dashing, lady killer— a handsome law enforcement officer on the road to the truth. I was skeptical at first. It never occurred to me that i would be cast in that light. It was really a shock and a pleasant surprise that he chose me for this part. I was floored. I was humbled by his faith in me.”

The series also examines the murder of Christopher Wallace, the Notorious B.I.G., and Woodbine is convinced the two rappers’ murders are linked.

“They were not playing it safe. They were taking risks artistically and for Pac, as an activist as well. There was a certain fearlessness in both of them. Pac had to get his message out. The money was secondary to him, it wasn’t his motivator. I knew him. He was on a mission. Getting paid was just the gravy,” he says.

“The only assumption that I made [at the time of the murders] was that the murders were connected. It was painful to reflect upon losing Pac so I didn’t go any further than that. I just knew it couldn’t be a coincidence. I didn’t delve into theorizing how it happened. In that sense, I was a blank slate going into this project.”

Despite his personal relationship with Tupac, Woodbine was surprised by a lot of facts he was faced with while shooting the series.

“When I started reading the script, it was fascinating to me the lengths the investigators went to and how they secured some of the information they got. It really is bizarre and an eye-opener. What struck me was learning that there were people working around the clock to solve both murders. They were working tirelessly to get to the bottom of the situation even though at the time, I remember thinking that they weren’t doing anything. I thought, they don’t care. They’re not even breaking a sweat. They just want this to go away. They want to sweep it under the rug,” he explains.

“What me and most people didn’t know was that there was a group of people working individually and collectively for years trying to solve this case. Everyone was motivated by different things but there were decorated, intelligent, competent people on the force and in different government agencies who were trying to figure it out that really blew my mind. The public wasn’t aware of that. As much as I have a disdain and a dislike for racist, murderous cops, I learned there are some really good people in law enforcement who want to do the right thing. That was an education for me.”

Woodbine reveals that he believes the still open murder cases are already solved and assures us the show will provide answers viewers have been waiting on for years.

“In my opinion, the crime is solved. It’s not what you know, it’s what you can prove. I honestly believe the audience is going to share my opinion by the end of the season. These guys solved the case and figured out what happened but there are always going to be people who have other opinions.”

Woodbine in reportedly gearing up to portray another important person in the upcoming CBS series, Main Justice, a show inspired by the life and work of Eric Holder, the first African American Attorney General of the United States.

Unsolved: The Murders of Tupac and The Notorious B.I.G. premieres February 27 on USA.