The SNL vet allegedly even used the N-word while on set. 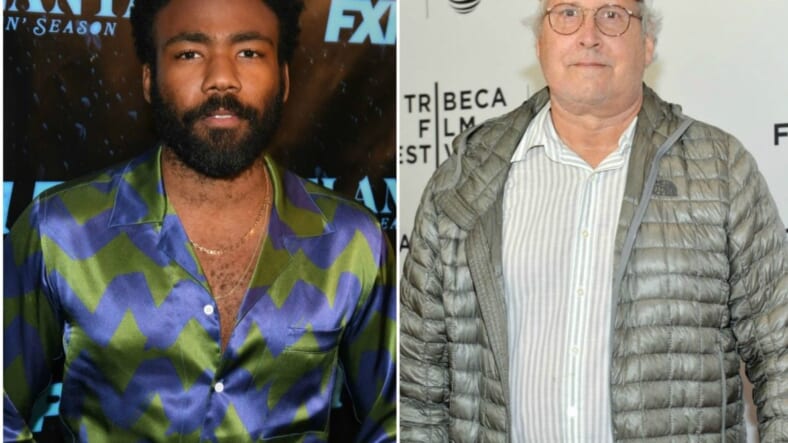 In a long and engaging New Yorker profile, readers got to know many interesting facets of Donald Glover‘s life and personality. The Atlanta creator and star shared stories about his childhood, opened up about the family he’s currently building, and talked about his experiences in Hollywood.

One of the more eyebrow-raising stories was about working on the set of the hit show Community with legendary comedian, Chevy Chase. Chase is best known for his work on Saturday Night Live and a laundry list of beloved family-friendly films like the Vacation franchise.

But according to some on the set, Chase was not exactly PC between takes on Community when it came to Glover.

Show creator Dan Harmon shared that Chase seemed to be jealous of Glover’s obvious talent and expressed that in inappropriate race-based jokes between takes. “People think you’re funnier because you’re Black,” Chase allegedly said. He also reportedly used the N-word in one tirade on set.

Harmon told the New Yorker, “Chevy was the first to realize how immensely gifted Donald was, and the way he expressed his jealousy was to try to throw Donald off. I remember apologizing to Donald after a particularly rough night of Chevy’s non-P.C. verbiage.”

Glover never fired back at Chase during his time on the show. When asked for a comment about the alleged incidents on the set of Community, Chase replied “I am saddened to hear that Donald perceived me in that light.” At least he didn’t even bother to offer a fake apology.

For his part, Glover is unbothered. “I just saw Chevy as fighting time—a true artist has to be O.K. with his reign being over. I can’t help him if he’s thrashing in the water. But I know there’s a human in there somewhere—he’s almost too human.”

While Glover kept his cool, the tension between Harmon and Chase escalated to the point where Chase left a profanity laced voicemail for Harmon and did interviews publicly trashing the show, calling sitcoms the “lowest form of television.”