Sen. Cory Booker on why he’s loyal to Michael B. Jordan’s character in ‘Black Panther’

New Jersey is representing from Hollywood to Capitol Hill. 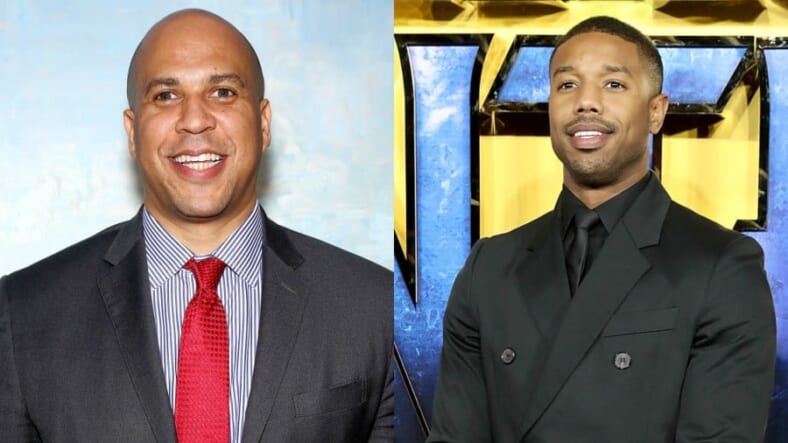 Black Panther villain Erik Killmonger (Michael B. Jordan) may have gotten a bad rap for trying to burn the world down in the name of Black liberation, but one politician says he totally gets where he’s coming from.

When asked if he was Team T’Challa or Team Killmonger from the global hit movie Black Panther, Senator Cory Booker (D-New Jersey) told theGrio it’s not an easy pick, but he’s loyal to one character for one very special reason.

“Michael B. Jordan is from Newark,” says Sen. Booker, a fellow New Jersey native. “Grew up in my community, so I will always be with Michael B Jordan. But clearly, T’challa is the compelling protagonist in the show.”

“The great thing I loved about it was the fact that they didn’t make the villain like so villainous. You can almost understand his psychology. Like, here you have these incredible resources and abundance and yet you see suffering of the African diaspora… And clearly, one of the lessons T’Challa got was this isolation, this nationalism sort of to speak, is not going to serve the greater good.”

Sen. Booker, the high profile former mayor of Newark who is rumored to be a strong 2020 Democratic presidential contender, says the lessons from Black Panther apply to real life.

“The African saying is, you know, “If you wanna go fast, go alone. If you wanna go far, go together. I think that that is such an important understanding; we belong together, we need each other.”

Took some young friends from my community to see #BlackPanther in Newark last night. Some of my staff, interns and other friends from the community joined. It was a good night of inspiration, imagination and motivation. https://t.co/KlGJImCV5T pic.twitter.com/lr0Fx5SYKS

Sen. Booker also hosted a local Black Panther screening for young people in Newark, as did Michael B. Jordan, who described his return home as “emotional.”

“To be able to come back to my hometown on this project means the world to me. I know how tough Newark is,” said Jordan in an interview with EXTRA.

“I know what it’s like to feel trapped, that you don’t have many options or opportunities. Hopefully, this movie will give them a little inspiration, give them a little motivation, and help drive their ambition to get beyond these city walls.”

Sen. Booker’s support for Jordan goes on as far back as the actor’s role in Creed and is sure to continue as the 31-year-old actor gears up to star in HBO’s Farenheit 451.

Michael, more than you know, you lift Newark with your success and love of your city. Thanks for reping The Bricks! https://t.co/P83syoLlgH

Watch the rest of our interview with Sen. Cory Booker on YouTube, where we tackle gun control, DACA, corporate PAC donations, and whether he’ll run for president in 2020.