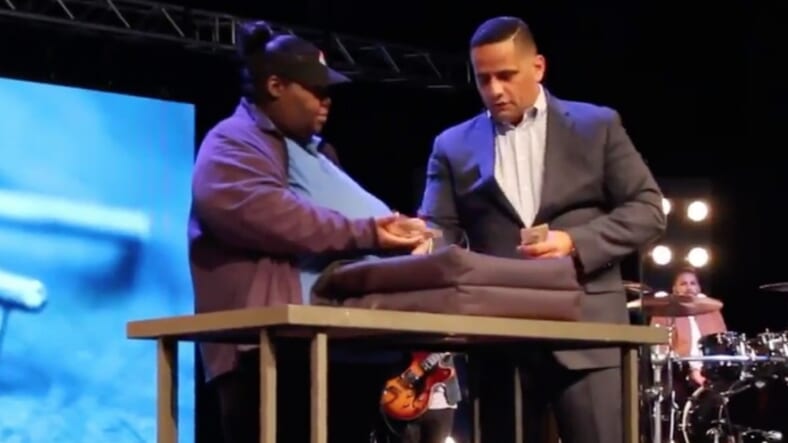 Monique Hall had no idea what blessings were in store for her when she arrived at a local Chicago church to deliver their pizza.

Hall arrived to a full service on Sunday, Feb. 2 to New Life Covenant Church. Upon entry, Pastor Wilfredo De Jesus was standing on stage. Hall later admitted that she was feverous as she began to walk to the stage to present him with his pizza.

Hall was then presented with a $100 tip for her service. But that wasn’t the end of it.

Pastor Wilfredo then called upon 10 other church members to join in on tipping her as well, as evident in the video posted on Facebook this week.

Hall’s tips began to pile up as each member handed her a generous sum of money.

“I was nervous. I did not understand why so many people had stood up for a pizza delivery person,” Hall told WGN.

“I definitely wasn’t expecting it, but I knew that I had been struggling for a long time being a single parent,” Hall said, “and not having their father in their life, it takes a real damper on you, especially trying to make ends meet.”

Hall is a mother of two and has been struggling to make ends meet. She became emotional from the amount of support she received from the community of churchgoers.

“I was overwhelmed and I was shocked. I felt so loved by them – all I could do was cry,” she said.

Although the crying was expected, it was not the intention. Their will, set by Pastor Wilfred at the beginning of February, was to challenge each and every member of his church to honor other people, to show gratitude for the people in their lives.

“We want to let you know, here at New Life Covenant Church, that whether you have a church to worship in or not, we want you to know that you’re welcome here,” Pastor Wilfredo said to Hall during a prayer following her surprise. “You’ll always remember this day that you were marked by God. It could of been any other restaurant, any other person, but it was you.”

Hall left the church with a new bible, a gift bag, and the money from her basket of tips.

Hall told WGN that she also spread the love that day, by sharing her tips with her co-workers.

“I felt like some of my coworkers were just the same as me, in the same place. So it was only right that I give to them, since I was given to,” she said.

For the month of February, we have been challenging our church to honor people. So Pastor Wilfredo De Jesús ordered a pizza with intentions of surprising the delivery person. She walked on stage and was clueless of what was going on. Hope you enjoy this video. Please share to spread the message of honoring people. #mynewlifeorg