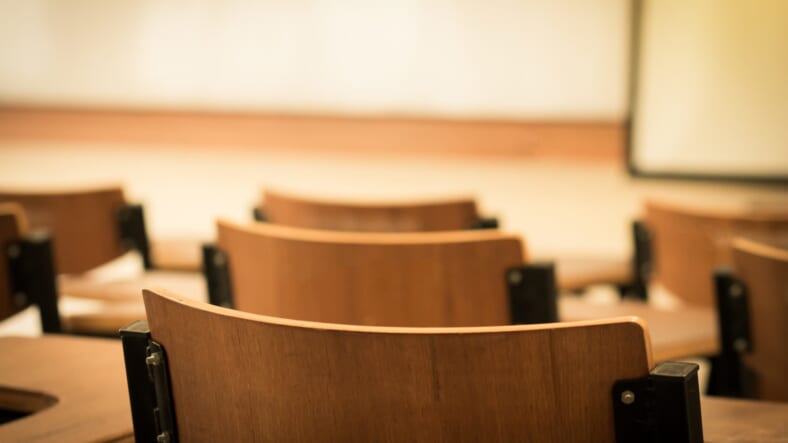 Three students in Arkansas reportedly received an old-fashioned punishment for walking out of their school during the national protests against gun violence.

Students at Greenbrier Public School in Arkansas are allowed to get “swats” as a form of corporal punishment for disobedience in the conservative school district, according to the Daily Beast.

Undeterred by the school policy, students felt empowered to join kids around the country when they walked out of their classrooms to advocate for stricter gun laws.

The Greenbrier Public School’s official policy, states the school board “authorizes the use of corporal punishment to be administered in accordance with this policy by the Superintendent or his/her designated staff members who are required to have a state-issued license as a condition of their employment.”

But one proud local mom said she didn’t mind that her child got the swat and supports his right to protest in support of gun reform.

“My kid and two other students walked out of their rural, very conservative, public school for 17 minutes today,” Jerusalem Greer wrote on Twitter. “They were given two punishment options. They chose corporal punishment. This generation is not playing around.”

Students around the country walked out of their schools in solidarity with the Parkland, FL protests which was sparked after the deadly shooting that killed 17 students and teachers and injuring dozens more at Marjory Stoneman Douglas High School.

Wylie Greer, one of the Arkansas students punished, spoke out in a statement to The Daily Beast late Thursday night and didn’t seem to mind the punishment he received. He wrote:

“Walking out of class at ten on Monday morning was not an easy thing. Many students were vocally insulting and degrading to the idea of the walk-out and anyone who would participate. At 10:00, I walked out of my classroom to a few gaped mouths and more than a few scowls. I exited the building, sat on the bench, and was alone for a few seconds. I was more than a little concerned that I would be the only one to walk out. I was joined by two others eventually, two of the smartest students at the school. We sat outside the front of the building and were approached first by the principal, who asked us “if he could help us” and “if we understood that there would be consequences.” After we answered affirmatively, he went back inside. A few minutes passed and the dean-of-students approached us. He asked “what we were doing,” we told him that we were protesting gun violence. He told us to go inside. We refused.

After the 17 minutes had passed, we re-entered the building and went to our classes. Over the next two hours, all three of us were called individually to talk with the dean-of-students. He offered us two choices of punishment, both of which had to be approved by our parents. We would either suffer two ‘swats’ from a paddle or two days of in-school suspension. All three of us chose the paddling, with the support of our parents.

I received my punishment during 6th period. The dean-of-students carried it out while the assistant principal witnessed. The punishment was not dealt with malice or cruelty, in fact, I have the utmost respect for all the adults involved. They were merely doing their job as the school board and school policy dictated. The ‘swats’ were not painful or injuring. It was nothing more than a temporary sting on my thighs. The dean-of-students did stress however that not all punishments like this ended this way.

I believe that corporal punishment has no place in schools, even if it wasn’t painful to me. The idea that violence should be used against someone who was protesting violence as a means to discipline them is appalling. I hope that this is changed, in Greenbrier, and across the country.