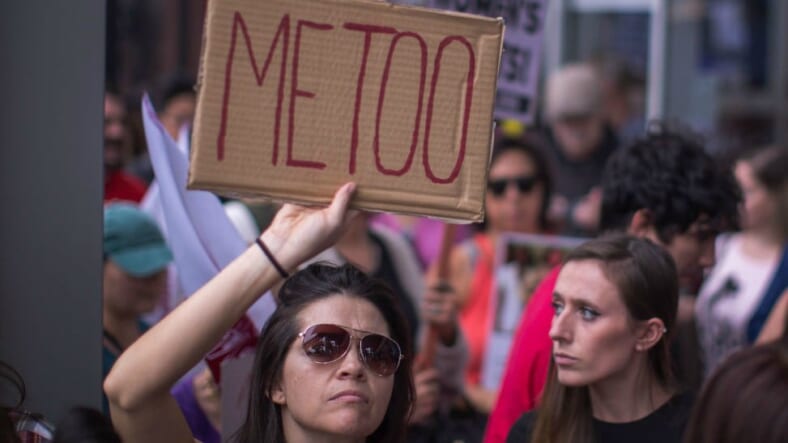 Demonstrators participate in the #MeToo Survivors’ March in Los Angeles, California. The protest was organized by Tarana Burke (not pictured). (Photo by David McNew/Getty Images)

The #MeToo movement may have started a very public discourse on what constitutes sexual harassment and the type of workplace behavior that is acceptable.

However, a new poll reveals that despite the ongoing cultural conversation, few Americans have made tangible changes to improve or change their actions in the office.

The Results Speak For Themselves

According to Newsweek, “Overall, about half of Americans—48 percent— say that the #MeToo movement has increased discussion about what’s appropriate in their workplace, although only 18 percent say they’ve personally changed their behavior as a result of the increased attention to harassment,” an NBC News/Wall Street Journal poll said this week.

The poll also shows that six in 10 working women feel they aren’t seen as equals by men in the workplace—a figure that has remained “virtually unchanged since the poll asked the same question in 1999.”

While it does underscore that a majority of Americans believe sexual harassment is being “appropriately addressed,” it also reveals that 36 percent of Americans feel the response has “gone too far.”

According to Newsweek, as allegations and stories about disgraced producer Harvey Weinstein ripped through Hollywood last fall, accounts by women from all walks of life started gaining attention. With the movement’s increased visibility, many said it opened the door to addressing abuses that have long been shadowed in the workplace.

As efforts were ramped up to address accountability and transparency across all sectors, data researchers looked to examine the scope of sexual harassment across the nation in its wake.

In The Wake An Alarming Rate Of Sexual Harassment Claims

Stop Street Harassment, a non-profit organization, conducted one of the first and most comprehensive studies this year.

According to Newsweek, the organization looked at the facts behind the movement in January, and found that 81 percent of women and 43 percent of men said they experienced sexual harassment or assault at some point in their lifetime.

The poll was a bit more in-depth as it broadened its definition of sexual harassment to include verbal sexual harassments such as catcalls and whistles. This resulted in a higher number of incidences in comparison to other nationwide polls.

From Hollywood to Congress, systems are now being put in place to create change. The Producers Guild and The Academy of Motion Pictures Arts and Sciences implemented new codes of conduct and rules for better behavior on set.

Recently, when a Guardian report revealed that sexual abuses were “rife” among the staff of the United Nations, immediate steps were taken to address the issue, including protection provided for those who submitted claims.