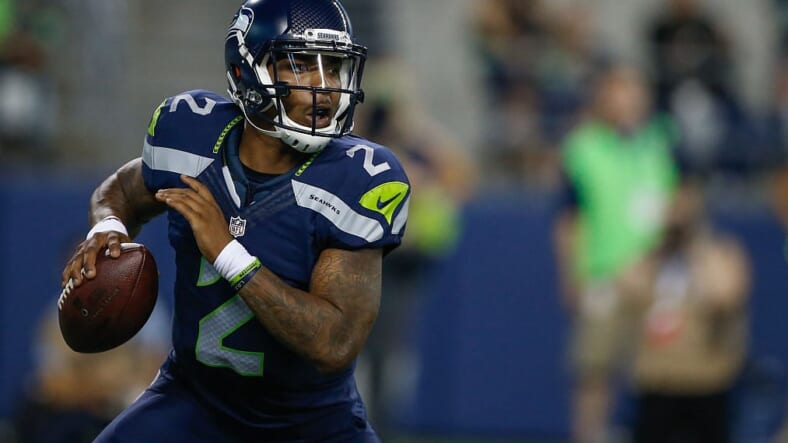 SEATTLE, WA - AUGUST 25: Quarterback Trevone Boykin #2 of the Seattle Seahawks looks downfield to pass against the Dallas Cowboys during the preseason game at CenturyLink Field on August 25, 2016 in Seattle, Washington. The Seahawks defeated the Cowboys 27-17. (Photo by Otto Greule Jr/Getty Images)

The Seattle Seahawks cut backup quarterback Trevone Boykin after accusations in a report published Tuesday that he choked his girlfriend and broke her jaw. Mansfield, Texas, police are investigating Trevone Boykin, after reports surfaced Tuesday of the violent attack last week against his girlfriend, Shabrika Bailey. Bailey reportedly woke up in a pool of blood.
-theGrio

A Black officer, Sgt. Ron Wade of the California Highway Patrol, says he withstood taunts of “Uncle Tom” during a protest over the death of Stephon Clark because that’s how he was trained. During the protest, participants reportedly shouted “Uncle Tom,” insulted his family and accused him of being a tool for the white man. Wade admitted that he was hurt by the incident and that what got to him the most was when protesters told him that he wasn’t Black.
-theGrio

Investigators in Florida are reviewing video of a West Palm Beach bar brawl that included a woman being pulled by the hair and tossed onto the ground by police. A fight broke out Sunday at a restaurant and bar in West Palm Beach, a bouncer told a woman to leave and wait outside. Video captured by a bystander shows the woman pushing her hand in the face of a police officer who then grabs the woman by the hair and slams her down on the ground.

The #WhoBitBeyonce controversy continues with Sanaa Lathan and Tiffany Haddish

Actress Sanaa Lathan is the latest to say she didn’t do it in the bite gate saga, also known as #whobitbeyonce. And the Love and Basketball star took to Twitter to proclaim her innocence writing, “Y’all are funny. Under no circumstances did I bite Beyonce and if I did it would’ve been a love bite.” TMZ posted  that Tiffany Haddish has told multiple people the culprit is in fact Sanaa. Chrissy Teigen posted on Twitter that she also knew who bit Beyonce but she wouldn’t spill the tea.
-theGrio