They know what's up. 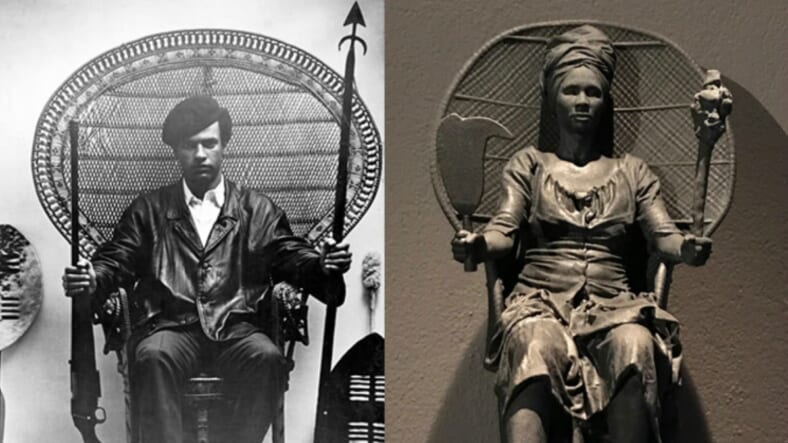 Danish artist Jeannette Ehlers and Virgin Islands artist La Vaughn Belle have teamed up to create a monumental public sculpture entitled I AM QUEEN MARY to be revealed on Saturday, March 31, 2018 at the Danish West Indian Warehouse in Copenhagen (Courtesy of the artist’s website)

Black Girl Magic is stretching all the way to Scandinavia.

Denmark, not a country frequently noted for its diversity, is celebrating what the country says is its first monument to a Black woman.

The 23-feet tall structure depicts Mary Thomas, rebel queen from the 19th century who staged a revolt against Danish colonial rule in the Caribbean, The New York Times is reporting.

The striking piece unveiled Saturday in Copenhagen by Black female artists La Vaughn Belle of the Virgin Islands and Jeannette Ehlers of Denmark shows Thomas sitting in a high-backed chair, a torch in one hand and a tool for cutting sugar cane in the other.

The artists have named the piece “I Am Queen Mary,” Belle says in a statement on her website.

On her homepage, a photo of the Mary Thomas statue is placed next to the famous photo of Black Panther cofounder Huey Newton, also in a high-backed chair, a gun in one hand and a spear in the other.

Many are familiar with Toussaint L’ouverture, the Black man who led the Haitian Revolution and slave rebellion in 1791 to free the country from French dominance. But chances are you have heard little about Thomas and the Fireburn, a revolt she and two other female leaders staged that destroyed 50 plantations and most of the community of Frederiksted on St. Croix.

Fireburn has been called the largest labor revolt in Danish colonial history, according to the Times.

“This project is about challenging Denmark’s collective memory and changing it,” Belle said in the statement on her site.”

The unveiling of “I Am Queen Mary” caps off a centennial celebration of Denmark’s sale on March 3, 1917, of three islands to the United States for $25 million. The islands are St. Croix, St. John and St. Thomas – all now part of the U.S. Virgin Islands.

Denmark banned slave trafficking in 1792 but did not enforce it until 11 years later. Slavery actually went on until 1848.

“I Am Queen Mary” sits in front of the Danish West Indian Warehouse, a former warehouse for rum and sugar brought in from the Caribbean, according to Belle’s site.

Ehlers told the Times that the creation of the statue marks a milestone.

“Ninety-eight percent of the statues in Denmark are representing white males,” she told the news organization