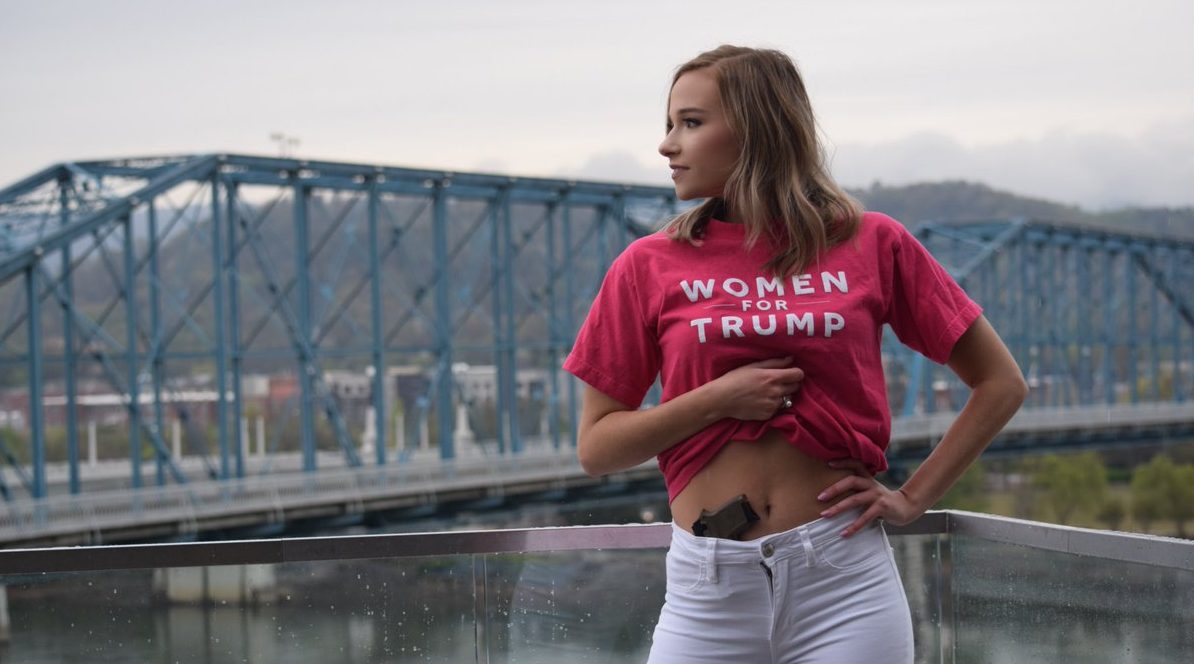 See a Sally’s Beauty Supply mirror taped to a driver side car door? See a metal detector at the front door of a movie theater? See a whole bus get held up when a man walks on with a docile goat?  We know that’s our shit at work.

See someone cussing out a police officer? See them wearing shorts in the middle of February in the Midwest? See raisins used as a recipe in any food dish? Well, that’s some of their shit.

At least once a week I see a video or image of something distinctly European in nature and wonder, “Hmm, what would we do?” So, I’ve decided to serve as the unofficial spokesperson for Negroes everywhere (no need to thank me) by telling you what I think we’d do in the case of a few videos and photos that have hit my desk of late.

What manner of caucacity? White girl Brenna Spencer poses for a “college graduation” picture wearing a “Women for Trump” shirt with a handgun clearly tucked in her waistband.

What we would do: Not this. We know that holding anything that resembles physical matter might get us shot by the police, so we’re not getting photographed with a gun unless we’re “about that life.” Also, we’re well aware that, unlike Tomi Lahren 2.0 here, we’ll have a much harder time getting a damn job after a picture like that goes viral.

What manner of caucacity? A white man with an obvious mental illness provokes an Asian passenger on a train, calling him a “Chinese n—-r” and actually slapping him.

What we would do: Most rational Black folks would recognize that this man is not well and brush off his verbal taunts. But many of us might forget about that lack of wellness as soon as the N-word slipped out of his mouth. All of us would put his ass on the ground the moment he lay hands on us. The code of the streets knows no compassion.

What manner of caucacity? People who call themselves “Ecosexuals” believe that having sex with nature will help combat climate change. No need to re-read that sentence – these folks are actually banging Mother Nature.

What we would do: Not only would we not do some rank shit like consciously place our genitalia in dirt, but we’re keeping anyone we know who does off of our furniture and away from our children. And they say we’re the over-sexualized ones.

What manner of caucacity? A Louisiana family uses a real-ass, grown-ass, live-ass alligator for a gender reveal when a man lifts its nose up and throws something in its mouth for it to chomp on.

What we would do: There’s a reason you see nary a person in possession with melanin in this video. To paraphrase an old D.L. Hughley joke: If we in the swamp, and there’s an alligator in the swamp, then we ain’t in the goddamn swamp no more.

What manner of caucacity? Professional snake handlers allow a Burmese python – the second-largest snake species in the world – to “play around” with their toddler as a means of bonding and affection.

What we would do: Look, the internet is full of white folks who clearly learned nothing from Steve Irwin spending time messing around with animals higher on the food chain than us. But man, not only would our scary asses not have a large snake just chillin’ in the cut, we wouldn’t involve our children in this shit. The kid is not old enough to give consent to this gamble with her life!

What manner of caucacity? Seattle has a “mermaid community” consisting of people who strap on fake fish tails to look like Daryl Hannah in Splash and swim around in bodies of water. And they quit their jobs to do this full time.

What we would do: Well, you’re already knocking out a large contingency of Black women with any activities that involve prolonged exposure of their hair to water. But there’s a dude in this video like, “I was wondering what that was swimming under my boat and it was just Ed.” How would you place the odds of survival of a Black person creeping in the water under random boats?

I’ll say it until I’m no longer drawing breath: One of the very best things about being Black is our unspoken understanding when we see certain shit unfold in front of us. Keep your mermaids and reptilian babysitters, I’ll hang on to my Black card.