Our prayers go out to our brothers and sisters in Uganda. 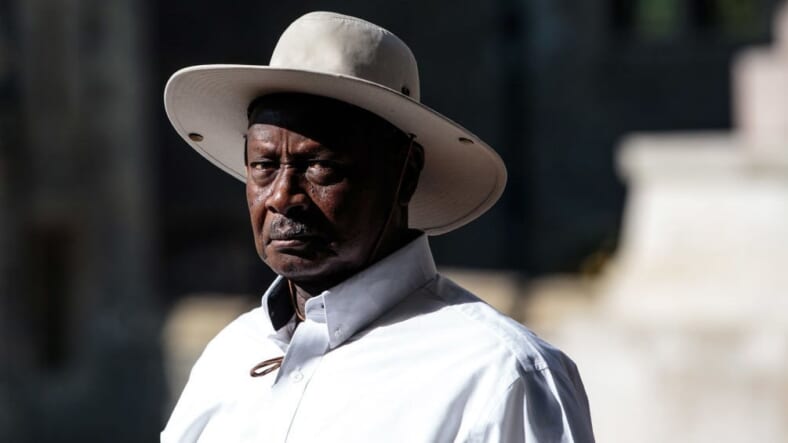 WINDSOR, ENGLAND - APRIL 20: President of Uganda Yoweri Museveni arrives at Windsor Castle for a retreat with other Commonwealth leaders on the final day of the 'Commonwealth Heads of Government Meeting' (CHOGM) on April 20, 2018 in Windsor, England. The UK is hosting the heads of state and government from the Commonwealth nations this week. (Photo by Jack Taylor/Getty Images)

Uganda’s President Yoweri Museveni has issued what he calls a “public warning” against oral sex.

Of all the problems plaguing his country that Uganda’s president could be focusing on right now – somehow oral sex made it onto his list.

Museveni believes the “ungodly and unnatural” practice of mouth sex has been pushed onto innocent Ugandans by “outsiders,” and argues that the mouth is meant solely for eating… food.

“Let me take this opportunity to warn our people publicly about the wrong practices indulged in and promoted by some of the outsiders,” he told the press during an address.

“One of them is what they call oral sex. The mouth is for eating, not for sex. We know the address of sex, we know where sex is,” he continued.

It’s hard to believe that this isn’t archival footage from a Chapelle Show skit, but our fact checkers have confirmed that he is indeed serious about this.

READ MORE:Bernie Sanders: Cardi B is right about Social Security

And it turns out this isn’t the first time Museveni has taken a stance that would make most people in the western world raise a brow.

He signed the Anti-Homosexuality Act in 2014, effectively making it illegal to be gay in Uganda. Which means Ugandans risk life imprisonment if they are found to be engaging in gay sex.

The act also makes it a criminal offense to not report someone you suspect of being gay.

Later that same year is also when Museveni made his disdain for oral sex known to his constituents.

“You push the mouth there, you can come back with worms and they enter your stomach because that is a wrong address,” he said.

Our prayers go out to our brothers and sisters in Uganda. Their president is creating an environment that is a breeding ground for anxiety, suspicion and false accusations.

One can’t help but wonder exactly how their government plans to prove who’s breaking these oppressive laws to begin with.

READ MORE: Propaganda Wars: Why the Black community needs to re-examine its relationship with weed

Man i done heard it all