And we are here for all of it. 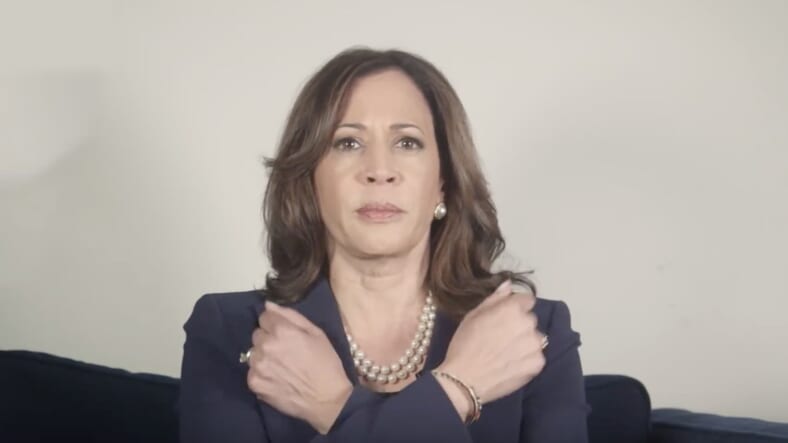 (Courtesy of The Late Show with Stephen Colbert )

Don’t let the tailored blue suit and poker face fool you. California’s Senator Kamala Harris shows us her funny side in a mock ad running for a Senate seat in Black Panther’s fictional utopia of Wakanda and boy do we wish this were true.

On Monday this week, Harris teamed up with The Late Show with Stephen Colbert and gave us Senate panel seriousness while making fun of a possible political campaign in the advanced nation. Is Harris getting us mentally geared up for a different kind of announcement, perhaps in a run for President in 2020? Rumor has it that she’s a frontrunner, but there’s no official word yet.

In the meantime, we can just imagine the possibilities of her at the head of our nation. In the mock ad, Harris said she would do her duty to unite the nation that was once in a self-imposed seclusion, and “it would be my honor to represent the people of Wakanda.

“I have committed the last three decades to public service, and I can offer insight toward policy as well as trade that will bring great value to the Wakandan empire,” she declares.

Harris is also ready to fight against the powers that be, and pledges to help the Wakandan land flourish again after Killmonger burned all the heart-shaped herbs.

She jokes: “Don’t worry, I’m from California. I can repopulate that field with a bunch of different herbs.” (Hint, hint)

And she’s a fighter in more ways than one.

“When it’s time to battle, I have no problem doing my fair share and grabbing a spear. Don’t let this outfit fool you,” the Senator said.

Harris said she would even cut her luscious locks to be a member of the Dora Milaje — now that’s dedication.

As for the vibranium, she would protect it at all costs. Her allegiance would be to Wakanda and not lobbyists and corporate firms.

It was all in fun, but Harris told The Breakfast Club this week the truth behind how such companies have a stronghold in the political world.

“Money has had such an outside influence on politics, and especially with the Supreme Court determining Citizens United, which basically means that big corporations can spend unlimited amounts of money influencing a campaign, right?” Harris said in her interview this week.

She added, “We’re all supposed to have an equal vote, but money has now really tipped the balance between an individual having equal power in an election to a corporation. I’ve actually made a decision since I had that conversation that I’m not going to accept corporate PAC checks. I just — I’m not.”

.@KamalaHarris wants the people of #Wakanda to know she’s ready to put in the work. #BlackPanther #LSSC pic.twitter.com/swbjJaMkS9