They've got moves for days. 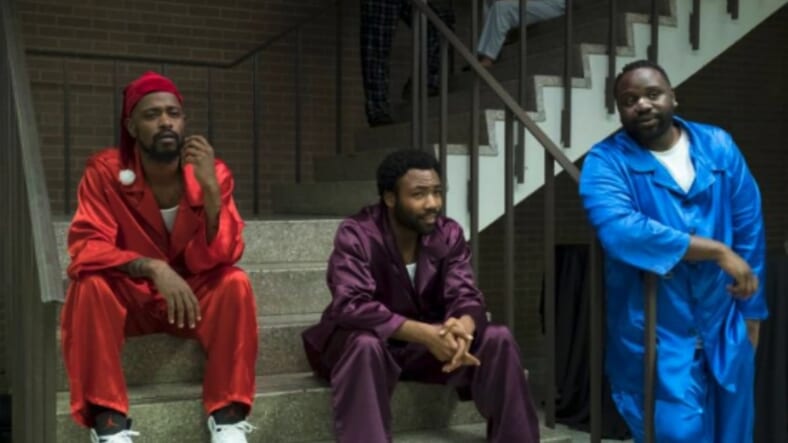 Just when we thought the cast of Atlanta couldn’t get any better, we saw this awesome video.

A deleted scene from the most recent episode of the hit FX series just surfaced showing Earn, (Donald Glover), Paper Boi (Bryan Tyree Henry), and Darius (Lakeith Stanfield) getting their groove on to TLC‘s 1994 hit, “Creep” and it’s just what we needed to get us through our Monday blues.

Donald Glover to host ‘SNL’ and perform as Childish Gambino

Director, Hiro Murai shared the clip of the deleted scene on social media. “couldn’t leave this on the edit room floor #atlantafx,” he posted.

couldn’t leave this on the edit room floor #atlantafx

The spot-on dance moves are delicious enough, but even more hilarious is the fact that they pulled off their silk-pajama look in front of their neighbors with no shame.

Considering how dramatic this particular episode was, it’s nice to see there was at least a little joy in the crew before the clouds came rolling in.

Need a refresher on the episode? Check out an excerpt from our recap:

Because everything can’t be simple, Tracy is taking his job as bodyguard a bit too seriously. When Violet dumps her drink on Al because he’s talking to other girls, Tracy confronts the woman, even as Earn tries to diffuse the situation.

Tracy is an ex-con hood n—a with minimal boundaries, so he pushes the girl’s face and she falls down the stairs in slow-motion, which would’ve ended horribly had Earn not caught her. Alas, she slaps the shit out of Earn anyway.

The situation gets even more tense when Violet’s brother comes after the four men as they attempt to leave. Earn tries to speak to them on some kumbaya shit but Tracy comes from out of nowhere, rocks the brother to the ground and tells everyone to run. Yet another example of poor Earn management.

Because ride shares seriously don’t seem to exist in Atlanta, we’re greeted to another montage of men walking up the street in defeat, only this time in colorful silk pajamas. As they duck away from the road thinking they’re hiding from cops (just campus security), they wind up near a white frat house, where they smell the weed that Al desperately desires.

The white boys recognize Paper Boi immediately and take him in. They wind up in a room with several pledges, all stark-ass naked, arms tied up, with potato sacks over their heads (do I need to tell you their color?) as they sit in front of the hugest Confederate flag ever made.

Darius and Tracy bond with a frat member over the rack of guns on the wall and find out they have a room full of guns, antique and otherwise. Clearly, no Black frat house in the South could get away with having guns just chillin’ on the wall in a main room. When those two dip off to check out the gun room, Al finally gives Earn a Come to Jesus talk about his shitty managerial practices, and essentially fires him.