‘Atlanta’ Recap, Season 2 Finale: A companion piece to Donald Glover’s ‘This is America’ 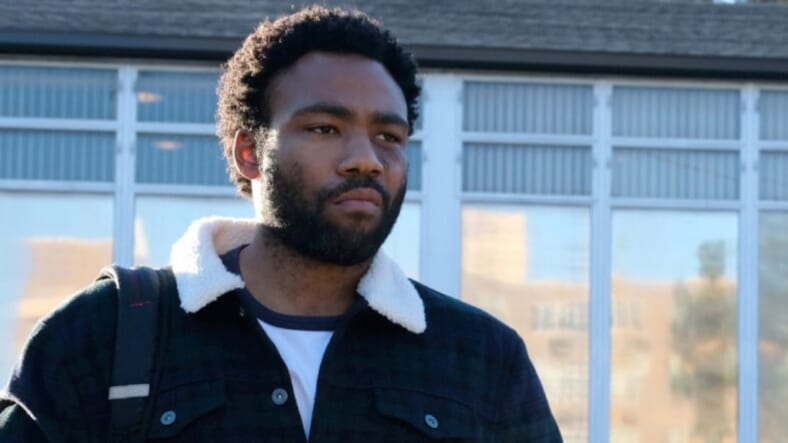 What a way to cap off Donald Glover’s biggest week ever: a dual hosting/music performer stint on Saturday Night Live, an ultra-viral Childish Gambino music video, “This is America,” which has been think-pieced into the ground as of press time; and now “Crabs in a Barrel.”

It’s the loudest commentary on what it means to be Black in America in Atlanta’s 21 episodes, and it actually serves as a decent companion piece for “This is America.”

The episode’s allusions to the Black American condition are clear and unflinching. It starts when Earn (Glover) brings his daughter Lottie (in the first time we’ve seen her all season) to an interview for a new lawyer to represent Paper Boi (Brian Tyree Henry).

Earn has to bring Lottie, much to Al’s annoyance, because he probably can’t afford to get a sitter. We thought Earn was fired as Al’s manager a couple episodes back, but not just yet.

Al is bothered that the (Black male) lawyer represents only “F-level rappers” and reality television stars. He’s also bothered that he should be headlining a European tour that they’re preparing to start, but which Earn clearly couldn’t pull off with his limited managerial skills.  “Time to start leveling up on n—–,” Al says. He’s ready to blow up properly.

Earn links up with Van (Zazie Beetz) for a parent-teacher conference at Lottie’s school. Her (Black woman) teacher informs them that Lotte is gifted, to which they’re relieved since they came expecting the worst. The teacher suggests Lottie move immediately to a private school that has the academic rigor to help her. When they suggest that she needs to stay because they can’t afford private school, the teacher keeps it a full buck and tells them that the school is awful and stunting her education.

READ MORE: 5 Powerful messages from Childish Gambino’s ‘This is America’

When Earn asks for something cheaper, she says, “Keep her in a happy two-parent household.” It’s something a troubling number of Black folks still lack.
When they return to the car, the banter between Van and Earn suggests that, unlike many co-parenting couples, the love is still there. Will it be revisited…? Not in this episode – Earn has to leave the country for a couple months.

As Earn and Darius (Lakeith Stanfield) visit an office to update Darius’ passport for the flight they’re taking the same day, Earn encounters a yarmulke-wearing Jewish kid who offers a family member’s services to legally represent Paper Boi. Al insisted earlier that Earn find him a Jewish lawyer, leading Earn to ask the kid if he thought there were Black lawyers as good as the ones in his family.

Sensing a potential trap, the kid gives a perfectly measured answer: “Of course, but Black people don’t have the connections my cousins have. For systemic reasons.” All truths.

As they wait for the passport to be finished, Van sends Earn a text message saying she’s thinking of taking Lottie to move in with her mom. Out of Atlanta. In an extremely vulnerable moment, Earn asks Darius if Al is planning to fire him. Darius responds with an almost trademark Lakeith Stanfield-ian level of warmth, telling Earn that Al simply doesn’t want Earn to fail when it comes to him, adding, “Y’all both Black so y’all can’t afford to fail.”

Earn attempts to talk to Al as they wait for the Lyft that will take them to the airport, but Al asks him to wait until they land. Darius said earlier that he believes Al wouldn’t fire Earn before Earn got the chance to see another part of the world.

When the men wind up in the TSA line at the airport, Earn discovers that the golden gun Katt Williams’ character gave him in the season opener is still in his backpack. Time slows for Earn, and he slides the gun into the bag of Clark County (RJ Walker), who is headlining the tour that features Paper Boi.

As they sit on the plane (not in first class), Al tells Earn that he saw what he did with the gun. “N—-s gon’ do what they gotta do to survive. We got no choice. You my family. You give a f–k. I need that.” Earn’s bold-ass decision to frame Clark County and potentially have Al take over as tour headliner goes over well. Earn is safe for now.

But…much to everyone’s surprise, Clark County makes it on the plane. He says his homeboy got caught up at TSA with a gun in his bag. Earn insists to Al that he slipped the gun in Clark’s bag. Did Clark sell out his boy or did his boy take the fall? It has to be the former since everything happened so fast. Al’s words about the need to look out for self manifested immediately in Clark’s actions.

The season closes out with Tracy (Kris Davis) banging on the door of their crib at night, a woman by his side, apparently unaware that they’re on tour.

“Crabs in a Barrel” a hell of a coda to a very interesting, often confusing, frequently mind-blowing season. And it does what Atlanta does best – depicts the struggle of poor Black folks just trying to make it in the world despite the many obstacles in their way. And it does it with a mixture of sadness and hilarity.

Here’s hoping we don’t need to wait another year and a half to get our season 3.