Life after prison: After being pardoned by Obama and becoming a lawyer, one woman explains what’s next for Alice Marie Johnson

Attorney Serena Nunn McCullers can relate to Johnson in a way that not many of us can. 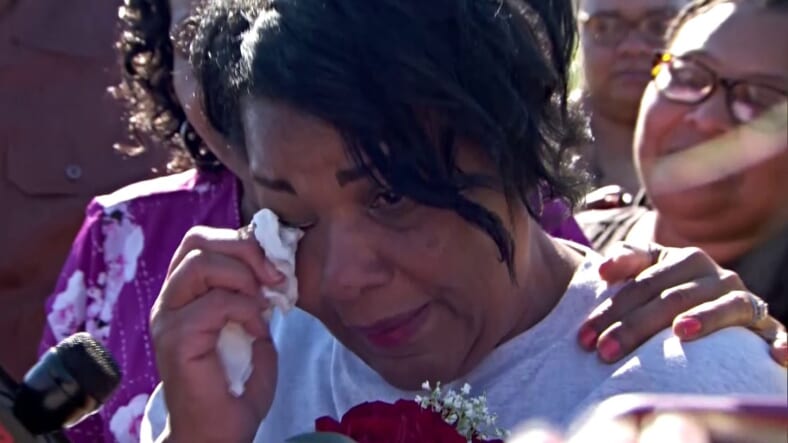 Alice Marie Johnson upon her release yesterday. (Courtesy of screengrab from CNN.com)

Serena Nunn McCullers knows all too well what Alice Marie Johnson is feeling today. She understands what it’s like for the 63-year old grandmother to open her eyes and wake up in a bed for the first time in many years that wasn’t situated within the walls of a prison cell.

At 19-years old, Nunn McCullers was sentenced to 15 years in prison for a non-violent, first-time drug offense. Just like Johnson, Nunn McCullers received a commutation from former President Bill Clinton in July 2000, which allowed her to leave after serving 11 years in prison. She would then receive a presidential pardon from former President Barack Obama. Since her release, Nunn McCullers has made the most of her time out by graduating from college and then the University of Michigan Law School. She passed the Georgia bar in 2012 and has been a practicing attorney ever since.

In her own words, Nunn McCullers shares specific insight on Johnson’s commutation, Kim Kardashian’s advocacy, and the bigger message this sends to the droves of Black people who remain locked up.

One can only hope and have faith that a commutation request will be granted, but when it actually happens, there is no other feeling that compares to the thought of knowing you will be released from prison. In Ms. Johnson’s case, this commutation is even more rewarding because she was sentenced to life in prison, otherwise known as, natural life.  After serving 21-years in federal prison, I’m sure her release feels surreal. Ms. Johnson is about to embark on a new journey, reconstructing her life, for which I’m sure she gladly welcomes. Honestly, I’m sure she probably cannot believe that she is finally free and home with her family.

Speaking of family, Ms. Johnson will have an opportunity to reacquaint herself with them.  After being away for so long there is so much life that has transpired and she will need time to catch up on the lives of her family members. Also, her family will likely be the security she needs with the whirlwind that follows a presidential commutation, including the media attention that’s about to engulf her.

When I was released, a myriad of thoughts ran through my mind like whitewater rapids.  Most of my concerns were based on life’s essentials. Where was I going to live? Where was I going to work so I could provide for myself? Who was going to hire a convicted felon?  How could I ensure I would be successful? In the weeks following my release, many of my thoughts were overwhelming, but my family and close friends played a major role in navigating me through difficult periods of my integration back into society after incarceration.

In the weeks to come, Ms. Johnson may feel overwhelmed by simply being out of prison or overwhelmed by handling the required necessities to function in society. Something as simple as filling out forms for a state identification card or to get her driver’s license then driving a car or merely catching up on technology. I am hopeful her family will be by her side to help her rebuild her life and accomplish the plans she has for her life.

I know that President Trump has not traditionally supported the Black community, however, not to sound selfish, but when a person is serving a draconian sentence in federal prison, the incarcerated person is grateful to whomever granted the commutation. What is appealing is that the process is being shaken up. I personally know how long and arduous the process can be, so it is refreshing to see someone get commuted without all of the bureaucracy. Hopefully, President Trump will continue to review and grant commutations and pardons to deserving people who were sentenced under disproportionate and cruel federal mandatory minimum sentences.

The message that Ms. Johnson’s commutation sends to other Black prisoners is one of hope. I’m encouraged that this is a signal of change in the tide of how commutation requests are processed and evaluated so they receive the same consideration in a more timely fashion.

The fact that Ms. Johnson had other people advocating for her made a world of difference. Most prisoners don’t have advocates, such as lawyers, representative and/or celebrities like Kim Kardashian West fighting on their behalf outside of prison. This is especially true, when they have been in prison for 21-years. An advocate on the outside fighting on your behalf is a way to have your individual story told. It allows people to see you and not just your crime. Many federal prisoners owe so much to advocates like, U.S. Representative Maxine Waters (D-CA) and FAMM (Families Against Mandatory Minimums) because they were and still act as voices for federal prisoners by speaking against the injustices caused by mandatory minimum sentences. They have worked hard to change the landscape of federal sentencing through legislative advocacy. During President Obama’s presidency, advocacy came in the form of lawyers volunteering their time and resources through organizations to file commutation requests on behalf of federal prisoners.

Attorney Sam Sheldon advocated for me in requesting a presidential commutation and pardon. If not for a multitude of advocates, many prisoners would never receive another chance at life after prison. When a prisoner fights to get his or her life back and someone listens to their cry, takes up their cause and fights from the outside — that prisoner feels the positivity of promise rather than the dread of hopelessness. Free people don’t realize that hope can be EVERYTHING to a prisoner.

It is important to note, pursuant to the United States Constitution, the executive clemency power affords the President the power to commute a federal sentence or pardon a federal offense. To further explain, a commutation is a reduction of a prison sentence and a pardon is the forgiveness of the crime and also a restoration of lost rights.  A commutation leaves the offense in place, but removes or changes the punishment. A pardon wipes away the offense completely.

In my case, I received a commutation on July 7, 2000, and as a result, I was immediately released from prison. Then, on December 19, 2016, President Obama pardoned my offense—I call that a double blessing.  I pray Ms. Johnson lives her life to the fullest with the second chance she has been given.  Also, I hope she will one day get her offense pardoned as well.

Serena Nunn McCullers is a criminal defense attorney in Atlanta who is using her expertise and personal experience as the recipient of  a presidential commutation and pardon to help other victims of the mandatory minimum sentencing for drug crimes.