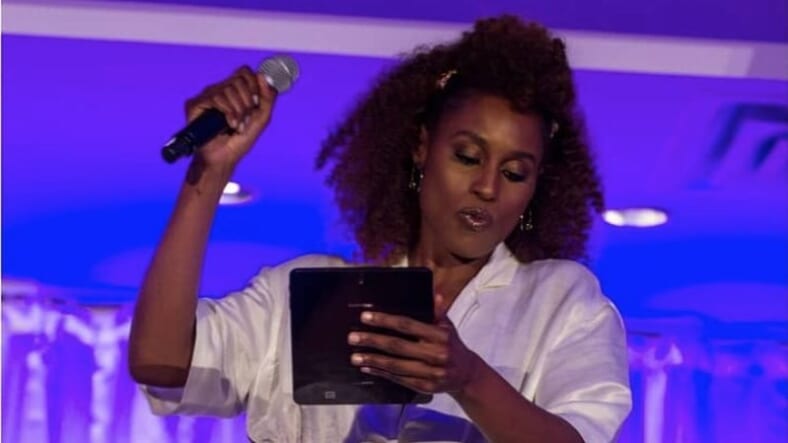 Jesse Williams is an actor, an activist, and an entrepreneur whose new app, Blebrity is likely to become one of your essential party-starters.

The Grey’s Anatomy star threw a super-secret soiree at The Soho House in Miami during the 2018 American Black Film Festival and gave his famous friends a chance to dance, unwind, and show off their trivia skills with his addictive game about all things black culture.

Jesse Williams explained his reasons for launching the app and highlighted the fact that it provides a long overdue option for black folks to show off their trivia skills with 30 hilarious categories that actually apply to us. A few of our faves are: Church, HBCU, The 90s, Actin’ a Fool, NYC, Celebrity Beef, Trap Muzik, and White Folks Invited To The Cookout.

Guests sipped on Ciroq cocktails, indulged in some snacks, played spades and dominoes, and tore up the dance floor after competing in a few rounds of the endlessly entertaining game that kept them laughing all night.

“It’s just an excuse to get black people together to kick it, play some spades, play some dominoes, and play the newest, latest, greatest game in the App Store, Blebrity,” he told guests. “We created something because we saw an absence in the market. We saw us swagging out everybody else’s products, trying to find ourselves in everybody else’s experience and games and not owning anything for ourselves or employing any of us, and waiting. We were tired of waiting so we decided to create something simple…We like to play games. Everything doesn’t have to be revolutionary or ratchet. We created something that made the revolutionary decision to not exclude black people and provides the experience of celebrating ourselves and celebrating our own creations.”

Issa Rae and Elijah Kelley faced off in an epic dance battle to Sugar Hill Gang‘s “Apache” (Jump On It) and the Insecure star also got down to “Knuck If You Buck” in an all-white ensemble.

The festivities continued into the wee hours of the morning and provided the perfect end to an exciting week of black excellence in entertainment.