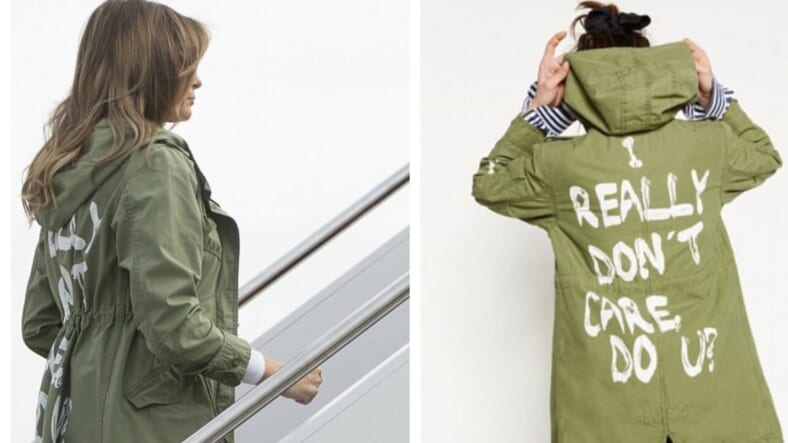 If you were wondering if Melania Trump cares about the over 2,300 children that have been separated from their families due to her husband’s cruel policies – according to her jacket, she doesn’t.

In a moment that legitimately feels like satire, the First Lady of Trump’s America, boarded a plane to visit immigrant children wearing a jacket that said, “I Really Don’t Care. Do U?”

According to The Daily Mail, the jacket she appeared to be wearing only costs $39 and is from Zara. Someone must have pulled her aside to talk some sense into her while she was on the plane, because she appeared to remove the tone-deaf garment by the time she landed.

Thursday afternoon Melania landed in Texas, where she visited an immigrant children detention facility and spoke to officials and assembled press about the children who have been separated from their parents due to White House “zero tolerance policy.”

“I would also like to ask you how I can help these children to reunite with their families as quickly as possible,” she reportedly told those in attendance.

It is hard to believe that sound bite when her husband has unapologetically treated both immigrants and their children like cattle kept in steel cages, and only reconsidered enforcing his polices when he received backlash from both democrats and republicans.

Trump’s hurried executive order designed to defuse a ballooning political crisis now has the White House scrambling to bounce back from this publicity nightmare and reunite the families they ripped apart.
But based on the facts alone, Melania’s jacket may be a more honest depiction of the oval office’s true stance immigration.

According to ABC correspondent Meridith McGraw, the First Lady’s spokesperson is dismissing this as just a fashion choice, saying: “It’s a jacket. There was no hidden message. After today’s important visit to Texas, I hope this isn’t what the media is going to choose to focus on.”

The $39 ZARA jacket the first lady wore as she boarded a plane to visit immigrant families in Texas read: “I REALLY DON’T CARE, DO U?”

NEW: @FLOTUS spokeswoman Stephanie Grisham when asked what message the first lady’s jacket intends to send: “It’s a jacket. There was no hidden message. After today’s important visit to Texas, I hope this isn’t what the media is going to choose to focus on.”

READ MORE: White student who lied about being raped by Black man gets paltry jail sentence