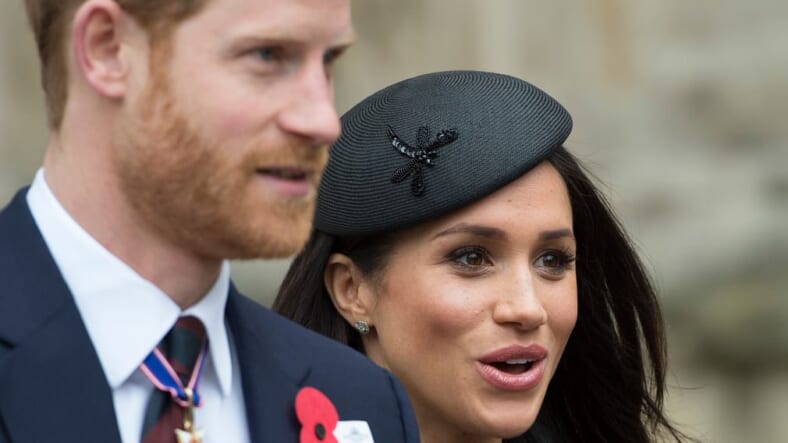 Meghan Markle is still riding the learning curve of being a royal.

Recently when the Queen took center court, the Duchess of Sussex reached for her husband’s hand, but Prince Harry reportedly clasped his hands together out of respect for his granny Queen Elizabeth.

There’s no public displays of affection when Queen’s around and Markle got a quick lesson about the no-no’s while the Queen is present at the Young Leaders Reception at Buckingham Palace on June 26. The affectionate couple have to be more reserved when the Queen is on the scene.

That’s old-school for get a room you two!

Royal watchers noticed the slight diss Prince Harry gave Markle Markle. If you haven’t noticed, it’s hard to tell the Queen is even married to Prince Philip since we’ve never seen them be affection in the 70 years they’ve been together.

It’s all a part of the “stoic values” of their generation, royal biographer Gyles Brandreth told PEOPLE.

“While we are much less likely to see The Duke and Duchess holding hands in public, we often see Prince Charles and The Duchess of Cornwall holding hands – it’s all simply a matter of preference for each couple and is also likely dependent on the nature of the event they are attending. A more serious engagement would warrant a more serious level of professionalism, which each royal is sure to follow.”

But you can catch Meghan Markle and Prince Harry getting quite cozy with other on occasion. They do hold hands quite a lot while out in public.

“While Prince Harry and Meghan holding hands is atypical for royal engagements, it is a seemingly welcomed gesture to show unity and celebration of their engagement period,” Meier adds. “There is no protocol that says they can not show affection on official engagements, and this gesture makes them relatable and lovable to the public.

“Meghan and Prince Harry holding hands at a royal engagement is a refreshingly modern approach to their new role both as a couple and as representatives of the royal family.”