50 Cent and Floyd Mayweather are beefing (again), but can we throw away both of them?

I mean, what would we really be losing? 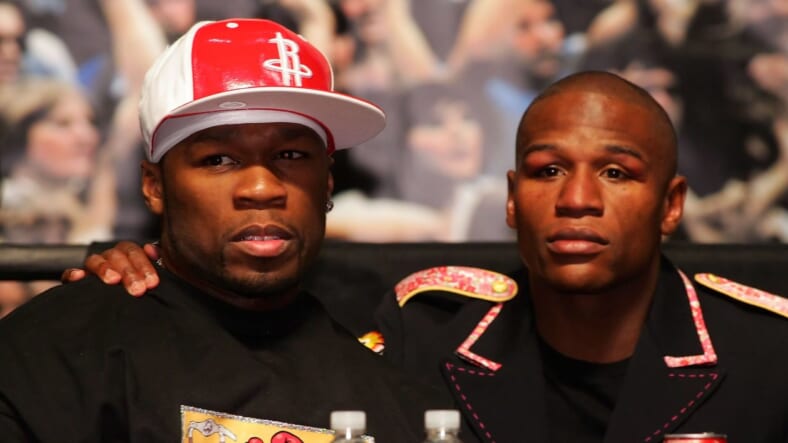 Not since the “great” Taylor Swift vs Katy Perry feud have I wanted to see two obnoxious celebrities both lose in a beef against each other as I do this ongoing madness with 50 Cent and Floyd Mayweather.

The two have had a weird is-it-or-isn’t-it-beef thing going for years – similar to Kevin Hart and Mike Epps – following an apparent falling-out from the days when 50 Cent was a member of Mayweather’s entourage, kicking it with him during trainings and walking to the ring with him before his boxing matches. But shit has gotten so personal as of late that I think we can assume that the ribeye is real, sizzling and marbled.

Before this weekend, the most recent flare-up came when Mayweather worked with singer Teiarra Mari, who is suing 50  after he allegedly leaked images from a sex tape of her (Which might be the most 50 Cent thing 50 Cent could have ever done). Fif viewed their business union as a betrayal and took public shots at the champ.

Apparently, Mayweather had some time on his hands this weekend and decided to remind us how mind-numbingly sad it is when rich, 40-something men use Instagram to publicly fight with each other: He “wrote” a 400-plus word diatribe about Fif underneath a completely unfunny graphic.

In one of those massive, unbroken, eye-straining paragraphs that I wouldn’t have finished if I didn’t have to write this piece, the Money Man shot off just about every bit of 50 Cent ammo he had on hand: his estranged child, baby mamas, Ja Rule, herpes, money issues and his dead-ass rap career. He even brings up the fact that no one watches Power (in which Fif stars and executive produces) for his character Kanan, who is only still alive because Fif executive produces the show.

Curtis “Confidential Informant” Jackson, you’re mad because your oldest son Marquees mother doesn’t want to be with you! Your Son, your own flesh and blood don’t want nothing to do with you! You haven’t had a hit song on radio in who knows when and you’re definitely not hot enough to even sell records anymore so Interscope dropped you. You are jealous of any rapper, athlete or entertainer that’s hot or got something going on for themselves. You are a certified snitch and we got paperwork to prove it. You talk about Ja-Rule but you stole his whole style and ran with it! You’re the only self proclaimed gangster that’s never put in work! You need to pay homage to the real 50cent for stealing his name and his storyline. Your claim to fame was getting shot numerous times & living to tell it and you think that’s Gangster? Where at? You’re currently living in a fucking apartment in Jersey, you are always in somebody else’s business just to stay relevant. You should just become a blogger cause it’s obvious you don’t have nothing going on in your life. Are you mad that Kanye West ended your career? The only thing you got going on is Power and everybody watches that because Ghost is a dope ass character on the show. You can leave the show everybody will still watch Power, but out here in the real world I’m The Real Ghost. That’s not a Mansion in Connecticut that you’re in debt for, that’s a dump, a money pit an oversized trap house! It was dope when Mike Tyson had it in the late 80’s early 90’s, but you couldn’t afford to maintain it. You’re always talking about somebody is broke, but the last time I checked it was Curtis Jackson that filed for bankruptcy not Floyd Mayweather. So quick to gossip like a Bitch, why don’t you tell everybody how you got Herpes from DJ. Where’s your memes for that, huh? Or better yet, post on how your Coca-Cola deal wasn’t really 300 million you fucking liar and tell how that spinning G-Unit necklace that somebody got robbed for was fake. Just remember, I was with you everyday and your driver Bruce was my driver also. I know where all your bones are buried, so be easy Curtis Jackson! And by the way, don’t ask to borrow no more money from me.

Since 50 Cent is a notorious social media troll, sparing no expense at shittiness in the interest of clicks, Mayweather’s attacks played right into his grubby Twitter fingers. The man has been on an Instagram tear the past few days. As of this writing, 50’s latest post targeting Mayweather is a bizarre public performance art video posted Monday morning that suggests 50 literally spent money on this beef.

Of course, since Mayweather gave us all an essay, Fif took the low-hanging fruit and took a shot at Mayweather’s literacy, which he’s been coming at since 2014, when he created a video during the disgustingly ubiquitous ALS Ice Bucket Challenge asking Mayweather to read a full page from a Harry Potter book.

For what it’s worth, I, don’t believe that Mayweather sat down and wrote that by himself either. But 50 Cent has all the gall to rip on someone’s literacy as many times as I’ve seen him f— up attribution and write “your” where “you’re” goes. Mr. Jackson is probably not the English teacher any of us need.

This was Floyd rough draft before he got his ghostwriter involved.? LOL ?get the strap #lecheminduroi

Keep the Horribleness to Yourself

It’s also aggravating that both of these idiots are taking shots at each other’s money issues: even if they have tax issues, they don’t have money problems like the rest of us. Mayweather is one of the top-10 highest paid athletes of all time. Despite filing for bankruptcy, 50 Cent has spent this century as a  savvy businessman who also frequently makes richest-rapper lists. It’s like a centipede and millipede beefing with each other over who has the most legs – neither of these banana-heads are worried about where their next meal is coming from.

This whole thing would be more entertaining if it were contained in an actual rap beef: Pusha T’s “The Story of Adidon” proved that saying awful shit about another human being is acceptable in certain contexts. None of this is as fun when we have to read the combatants do the equivalent of passing each other mean stick figure drawings in class. Put a beat behind this shit and hit the studio, Fif!

Regardless of their talents in their respective fields, both men are objectively awful people who, between the two of them, have likely done enough horrid things to black women to fill a whole chapter of the eventual #MeToo textbook; Mayweather, especially, has managed to continue milking huge paydays after multiple domestic violence accusations and even after serving a couple months for a domestic battery charge back in 2012. His then-friend 50 Cent was there to pick him up when he got out of the slammer.

If karma really were a b—-, they’d both lose their fortunes and no one would hire them to do anything anywhere.

Alas, the world is unjust, so we’re left watching these n—as nig it up for the ‘Gram, knowing that their words will likely result in no real consequences. If anything, I feel for their children, who are forced to explain to their friends why daddy is trash and engaged in a trash social media cockfight with another trash daddy.