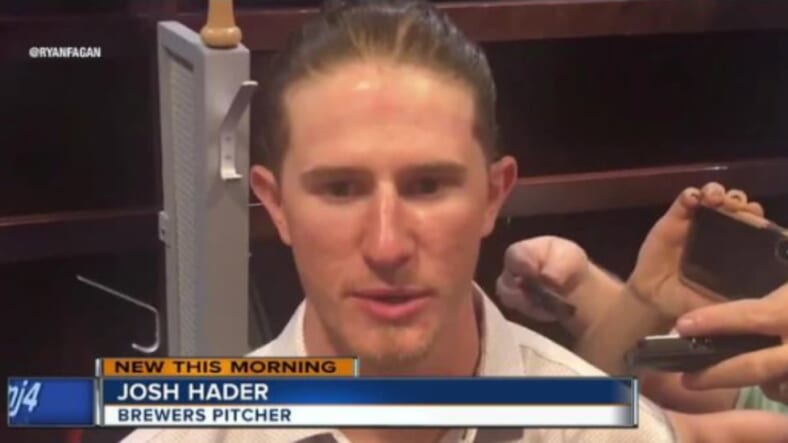 Milwaukee Brewers pitcher Josh Hader got a warm welcome back on Saturday just days after racist tweets were discovered.

Last week, Josh Hader apologized for the homophobic and racist tweets, one which simply said ‘KKK’, which have since been deleted, and he set his account to private after they circulated heavily on social media during the MLB All-Star Game.

Saturday, most of the 36,000 fans at Miller Park, gave him a standing ovation when the left-handed pitcher hit the mound, according to the Daily Mail. Surprisingly some of Hader’s African-American teammates were in support of him too and stood behind him 90 minutes ahead of Saturday’s game against the Los Angeles Dodgers, during a news conference.

“It’s amazing. It tells me that they have my back and that we are a true family,” Josh Hader said about the show of support.

“I just want them to know that I’m sorry for what I did back in the day and the mistakes that I made,” Hader said, “and that they are a family to me and that [the tweets] aren’t me and what I meant.”

Josh Hader said: “They were never my beliefs. I was young. I was saying stuff out of just ignorance and that’s just not what I meant.”

Some of the consequences for the racist tweets include sensitivity training that he’s now required to take, the MLB announced. Hader must also take part in the league’s diversity and inclusion initiatives.

“During last night’s game we became aware of Mr. Hader’s unacceptable social media comments in years past and have since been in communication with the Brewers regarding our shared concerns,” the MLB said in a statement Wednesday.

“After the game, Mr. Hader took the necessary step of expressing remorse for his highly offensive and hurtful language, which fails to represent the values of our game and our expectations for all those who are a part of it. The Office of the Commissioner will require sensitivity training for Mr. Hader and participation in MLB’s diversity and inclusion initiatives.”

The Brewers also released a statement on Wednesday about Hader’s comments.

“His comments are inexcusable, and he is taking full responsibility for the consequences of his actions,” the statement said. “Those of us that have come to know Josh do not believe that these posts are representative of his beliefs. He has been a good teammate and contributor to the team in every way. We will continue to work through this issue with Josh as we prepare to resume games after the break.”

According to the Baltimore Sun, in one tweet, dated Oct. 25, 2011, Josh Hader tweeted lyrics from the Juicy J song, “Durr She Go,” that used the N-word. Another from 2011, said simply, “I hate gay people.” There are also tweets that are sexually graphic and demeaning toward women.

Hader also had a meeting with Billy Bean, MLB’s vice president for social responsibility and inclusion. He said Hader was “punishing himself more than probably anyone else could.”

“I was really convinced after a couple hours together today – much longer than we expected – that his experience as an athlete and a professional in an integrated, diverse environment has created the person that he is today,” Bean said.

“I believe that, much like many of our millennial youth, he just probably forgot about whatever that moment was in his adolescence,” Bean added.