The team's new face made the proclamation after owner Jerry Jones said players will stand for the anthem and cannot remain in the locker room. 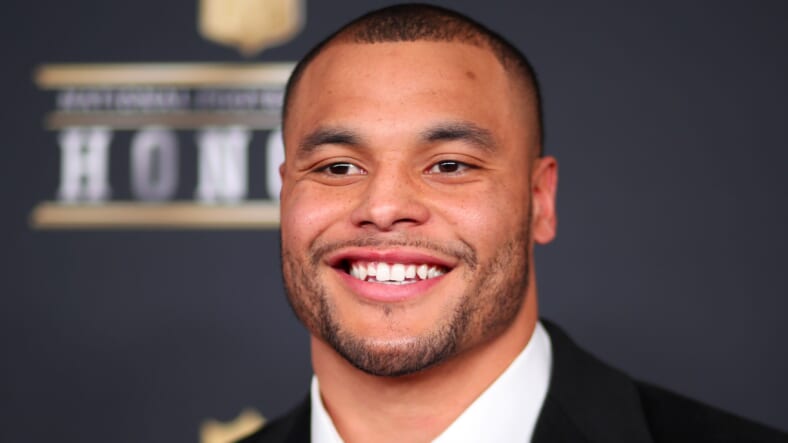 Dallas Cowboys quarterback Dak Prescott is going against the grain with his recent statement that kneeling during the national anthem at NFL games is not the right place to protest, the Star-Telegram reports.

Prescott is one of few NFL players to publicly support the NFL’s new no kneeling policy. As the NFL and the players union work out the kinks of the deal that deals with penalties, Dallas Cowboys owner Jerry Jones doubled down Wednesday saying that his team must stand for the anthem, and can’t stay in the locker room.

Prescott said he won’t be taking a knee no matter what. Free agent Colin Kaepernick started the protest to help fight police violence against brown bodies.

During the Civil Rights Movement there were a number of black athletes like Dak Prescott that publicly refused to get involved.
They got called out for it.

Dak Prescott has to get to his second contract. He’s not messing that up over the anthem issue. However, he should have not said anything about the anthem. Just zip it Dak.

“I don’t think that’s the time or the venue to do so,” Prescott said, via the Star-Telegram.

“The game of football has always brought me such a peace and I think it does the same for a lot of other people, people playing the game, people watching the game and any people that have an impact on the game. So, when you bring such a controversy to the stadium, to the field, to the game, it takes away. It takes away from the joy and the love that football brings a lot of people.”

But Philadelphia Eagles safety Malcolm Jenkins, who first raised his fist during week two of the 2016 season, is determined not to be silenced.

During the 2017 season, Jenkins and retired NFL wide receiver Anquan Boldin founded the Players Coalition, a group of around 40 NFL players focused on criminal justice reform issues within communities across the U.S.

Members convinced the NFL to agree to donate $89 million over seven years to projects dedicated to criminal justice reform and community outreach.

And Jenkins recently made headlines in June when he staged a silent protest by refusing to speak during his entire interview with the press—choosing to instead answer questions by holding up signs that explained how NFL players are protesting police brutality and racial injustice, NOT disrespecting troops or the flag.

“The rule was disappointing,” Jenkins told NBC. “But more importantly, the rhetoric that they used to explain why they put in the rule was the most disappointing because they went back to talking about the flag, the anthem, and having respect when, for a year and a half, they’ve been hand in hand with us. Seeing what we’ve been doing in the community.”

Recently, Tennessee Titans defensive end Jurrell Casey, the first player to avow his defiance against the policy, came out and said he will take the penalty all season during NFL games.

“I’m going to protest during the flag — that’s what I’m going to say now,” Casey told CNN during a promotional event in London.