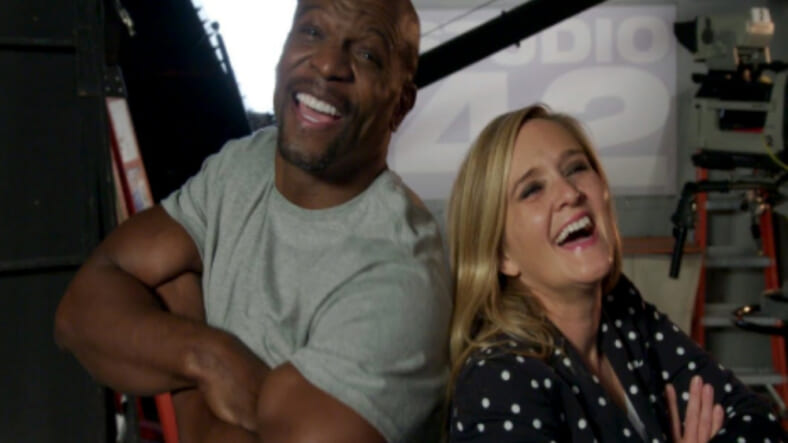 Earlier this year, Brooklyn Nine-Nine star Terry Crews became the butt of jokes when he spoke out against sexual abuse with his own #MeToo moment.

But Crews wants the world – and a few crass folks – to know it’s not a laughing matter and he teamed up with Full Frontal host Samantha Bee for a PSA urging people to stop making light of rape and sexual abuse.

“Sexual assault of men is a real problem and not a joke despite the way we tend to talk about it,” Bee said.

Bee took a serious moment to note that one in 33 men in the US have been victims of attempted or completed rape. She showed clips of comedians joking about getting raped in prison and even a clip about how police joked about throwing someone in jail and them having to watch their “tight end” with a picture of a bar of soap on a rope, according to The Hollywood Reporter.

Bee and Crews appear in one scene to urging people to stop telling rape jokes and jokes about boys getting molested.

“Something not funny is acting like high schoolers getting assaulted by teachers,” Crews says. He then says something “funnier” would be taking “a pie to the face that’s filled with bees.”

Terry Crews shared his #MeToo moment with the Senate Judiciary Committee last June and testified for a hearing on the Sexual Assault Survivors’ Bill of Rights about his damaging sexual assault experience in Hollywood at the hands of a powerful agent.

“The assault lasted only minutes,” Terry Crews told the committee, “but what he was effectively telling me while he held my genitals in his hand was that he held the power. That he was in control.”

Terry Crews was recounting his harrowing 2016 experience where he says WME partner Adam Venit grabbed his genitals and groped him at a party. Crews, who has filed a lawsuit against Venit, didn’t name him during his testimony.

“This is how toxic masculinity permeates culture. As I shared my story, I was told over and over that this was not abuse. This was just a joke. This was just horseplay. But I can say one man’s horseplay is another man’s humiliation.”

The Sexual Assault Survivors’ Bill of Rights, “gives survivors the right to have time to distance themselves from the immediate trauma before making the difficult decision to report the assault to law enforcement.”