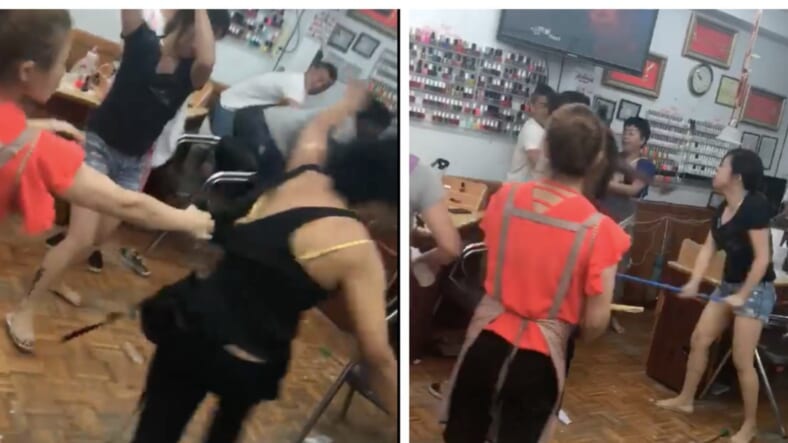 A vicious brawl at a Brooklyn nail salon sparked protests outside the salon and a call to close down the shop after several Black women were beaten by Asian employees for refusing to pay $5 for a botched eyebrow job, according to reports.

Michael Lin, the manager of the Asian-run 888 Happy Red Apple Nails shop, said he called the cops after one of the women said she was not going to pay for services rendered for the botched eye brow job, the NY Post reports.

But things took a turn for the worse and employees of the shop were caught on video badgering and beating several women with broomstick handles and a dustpan.

After the melee, a protest was held outside of the salon, demanding that people not support the business.

An activist on Instagram by the name of Jasmine Johnson, @breuckleengoespublic on Instagram, posted a video urging people to join in the fight to shut down the salon.

READ MORE: ‘I come from a lineage of broken male-female relationships’: Beyoncé reveals how she forgave Jay-Z in Vogue September issue

“We’re out here today because a grandmother came here with her two granddaughters to get their nails done. The granddaughter got her nails done, her feet done and her eyebrows done. She paid for the nails. She paid for the feet. Her eyebrows were messed up and she did not want to pay for them. Eyebrows cost $5 ladies and gentlemen. So because she did not want to pay the $5 for her messed up eyebrows they attacked this grandmother and her two granddaughters,” explains @breuckleengoespublic on Instagram.

A salon worker, Huiyue Zheng, 32, was arrested charged with assault and weapon possession, according to police.

A salon customer was arrested as well. Zheng was released from jail on her own recognizance after a hearing in Brooklyn Criminal Court, cops said.

Customer Christina Thomas was booked on misdemeanor assault and other charges. She was also released on her own recognizance, the Post reports.

The video now has more than 700,000 views with many on Facebook urged people to stop supporting the nail salon.