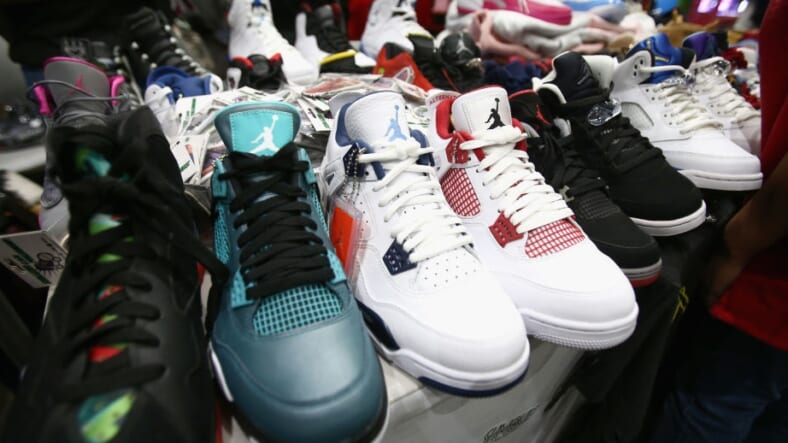 during day one of 2018 BET Experience Fan Fest at Los Angeles Convention Center on June 22, 2018 in Los Angeles, California.

What are those! Hopefully, they are the real Nike Air Jordans on your feet, but if you copped a pair of the coveted sneakers somewhere in Brooklyn and Queens NYC, they just might be counterfeit.

NYPD made a huge bust and snagged $73 million worth of counterfeit Air Jordans in a massive counterfeit sneaker traffic ring, ABC News reports.

At least five people have been arrested and charged in New York City with trafficking the fake footwear. The sneakers arrived at the Port of Newark from China and were transported to locations in Brooklyn and Queens to undergo a transformation to have logos added and be distributed for sale, NYPD and Homeland Security Investigators said. Those logos are registered trademarks.

Court records said, over the course of the last two years, 42 containers filled with the fake footwear, arrived in the stated and would be sold at retail for upwards of 190 per pair.

“These five individuals are alleged to have been a part of a large scale counterfeiting scheme, importing nearly a half million pairs of knock-off Nike sneakers. These counterfeiting networks can be both detrimental to our economy and threaten our national security, and HSI will continue to take every measure in investigating and dismantling these organizations,” ICE HSI Special Agent-in-Charge Angel M. Melendez said.

For the crime, the defendants face a maximum potential sentence of 20 years in prison.

“The five defendants in this case allegedly counterfeited over $70 million in fake Nike shoes and sold them to buyers on the U.S. market. I commend our law enforcement partners for helping to bring today’s charges, which send a clear message to would-be counterfeiters: ‘Just don’t do it,'” Manhattan U.S. Attorney Geoffrey S. Berman said.

Nike’s Air Jordan line of sneakers are one of the most sought-after brand of footwear on the market.

While Nike’s motto is Just Do It, — a word of caution: just don’t.