Until then, Emmie and her sister, Darcy Woodward, who were adopted by white parents, said they had never experienced racism at the school. 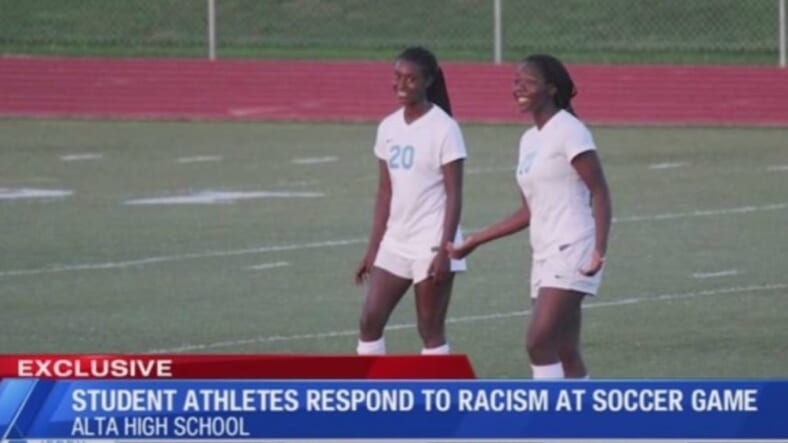 Emmie and her sister, Darcy Woodward, who were adopted by white parents, said they had never experienced racism at the school.(NBC 4 Utah screenshot)

“I didn’t know what to do,” soccer player Emmie Woodward, a senior at Sky View High School, north of Ogden, told the station. “I was so shocked. I was so confused.”

Emmie and her sister, Darcy, are Black and were adopted by Mark and Kate Woodward, according to News 4 Utah. They grew up in predominantly white Smithfield but said they have never faced attacks due to their race—that was, until Tuesday’s game.

“It was probably 10 minutes into the first half when I heard a guy say, ‘Black lives don’t matter,’ “ Emmie Woodward said. “I was so hurt because I never thought people would say something like that to me.”

Darcy Woodward, Emmie’s sister, said she was called the N word during the game.

“One person said, ‘Hey, number 20, I hope you’re embarrassed.’ I heard another one of them say, ‘Nice shot, n—-r,” Darcy told the television news station.

The girls said they brought the harassment to the attention of a referee and school staff members and nothing was done. As a result, their parents contacted the Canyons School District for answers.

The girls’ mother said the incident needs to be addressed.

“There are two aspects to this whole thing – one is (what) the students were doing, but the second is what the adults were not doing,” Kate Woodward said. “This is abuse and parents need to step up and teach their kids that this is not acceptable in a high school situation or a sports situation.”

The Canyons School District, in Sandy, Utah, has launched an investigation and the principal has begun to interview those who were at the game, spokesman Jeff Haney told News 4 Utah.

“Canyons District has a very strong anti-discrimination, harassment, bullying policy,” Haney said. “We want to make sure that any student that comes to Canyons School District, whether they’re part of one of our schools or part of an athletic team from another school, that they feel welcome.”