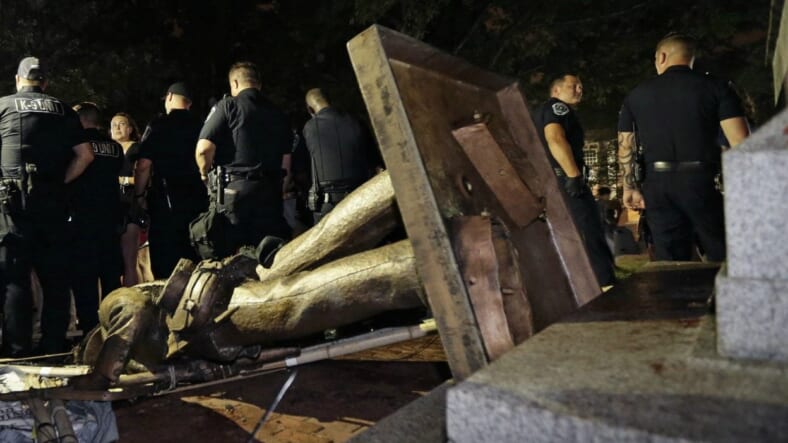 Police stand guard after the confederate statue known as Silent Sam was toppled by protesters on campus at the University of North Carolina in Chapel Hill, N.C., Monday, Aug. 20, 2018. (AP Photo/Gerry Broome)

The Confederate statue of “Silent Sam”, which has long been a serious bone of contention on the campus of the University of North Carolina Chapel Hill, was knocked to the ground by protestors, the NY Daily News reports.

On Monday, more than 300 demonstrators took to the school’s Peace and Justice Plaza at about 7:30 p.m. to demand the removal of the controversial statue. The statue is supposed to memorialize the 321 University of North Carolina-Chapel Hill alumni who died during the Civil War while fighting for the Confederacy.

But by 9:30 pm, the statue, which depicts a Confederate soldier holding a rifle, was down. Tensions rose between protestors and the police and on person was reportedly arrested during the rally.

UNC said in a statement, “Tonight’s actions were dangerous, and we are very fortunate that no one was injured.”
The university said it was “investigating the vandalism and assessing the full extent of the damage.”

Installed in 1913, it was commissioned by the state’s chapter of the United Daughters of the Confederacy.

The statue has been vandalized before and faculty and students have called for its removal saying that it was a racist reminder of the past.

Last month, Florida State University is joined a growing list of communities and institutions that gave the boot to statues commemorating people who contributed to slavery or the abuse of black people.

An advisory panel of students, faculty and other interested parties voted that the statue of Francis Eppes VII is not the kind of monument they want standing at the entrance to their campus. The statue was removed in July night, The Tallahassee Democrat reported.

Eppes was a founder of FSU and former mayor of Tallahassee, where FSU is located, but also a slave owner and grandson of Thomas Jefferson.

READ MORE: Police use stun gun on Black father as he holds on to his two month old baby