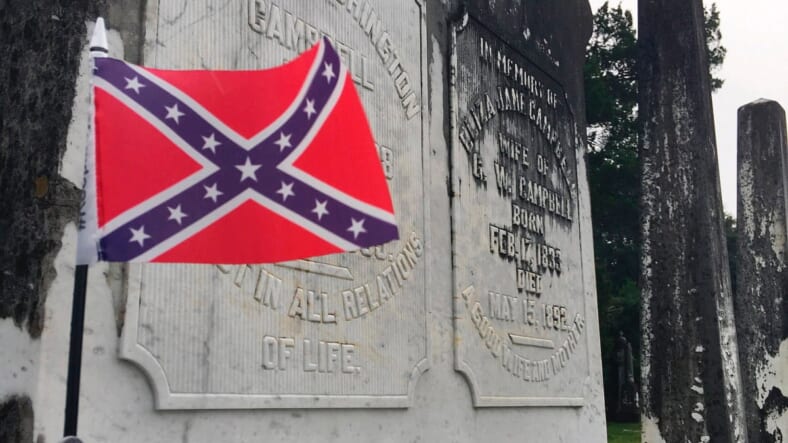 A small Confederate battle flag waves at the grave of a Confederate veteran in a cemetery in Tuskegee, Ala., on Tuesday, July 31, 2018. The mostly black city still has a Confederate monument dedicated in 1909 by the United Daughters of the Confederacy, which has a small chapter in the city. (AP Photo/Jay Reeves)

When Black folks occupy seemingly white spaces in this age of Donald Trump, we must be mindful that some ish might pop off due to their discomfort of melanated people.

One 18-year-old Black male learned that the hard way while attending the Willamette Country Music Festival in Brownsville, Ore., and it cost him a trip to the hospital.

READ MORE: Racist couple attacks Black man with car, threatening to run him over for parking on their street

According to the Sacramento Bee, when the teen spotted a Ford pick up truck waving a “large” Confederate flag, he yelled at the occupants who stopped the vehicle and officials say one male got out and he and the two began yelling at each other. Things escalated to the point that the Confederate-sympathizer hit the young man several times and then drove away.

The publication noted that the teen was found by friends wandering the grounds and they called police, who searched for the truck and the three occupants — described as either in their late teens or early 20s — but to no avail.

The suspect that assaulted the teen reportedly had dark hair and was wearing blue jeans, a black muscle shirt with the sides cut, brown boots and a black cowboy hat, according to law officials. The victim was transported to a local hospital where he was treated for his non-life threatening injuries.

Linn County Lt. Michelle Duncan told the Salem Statesman-Journal the alleged assailant could be charged with a hate crime.

“We’re going to investigate that portion of it as well,” she told the paper. “Until we do more interviewing, I can’t say whether it will be or not.”

“We don’t condone any act of violence on site in any way, shape or form,” Hankin told the Statesman–Journal. “We are working hand-in-hand with the Sheriff’s department to help identify who these individuals are.”

READ MORE: Watch white supremacist loser get blasted by his own dad during hateful livestream