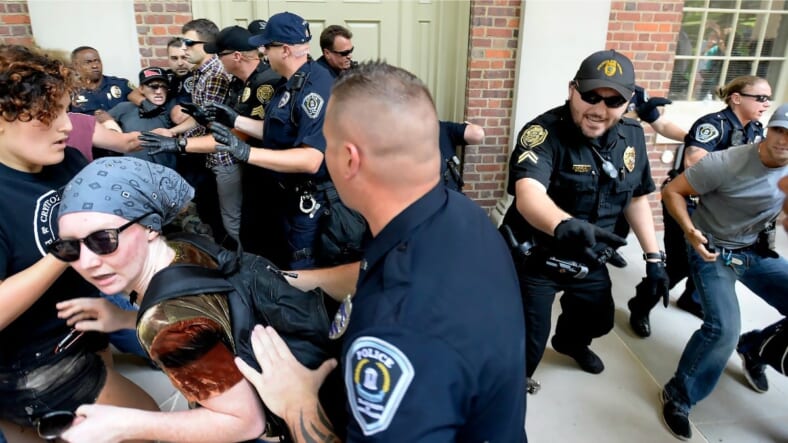 Protesters scuffle with police during a rally in front of Graham Memorial Building on the campus of UNC in Chapel Hill, N.C., Saturday, Aug.25, 2018. The rally featured those for and against the removal of the controversial “Silent Sam” statue which was toppled earlier this week. (Chuck Liddy/The News & Observer via AP)

CHAPEL HILL, N.C. (AP) — Seven people were arrested Saturday at a rally calling for a century-old Confederate statue at the University of North Carolina to be returned after it was yanked down five days ago.

About a dozen people carrying Confederate flags were met by dozens of protesters that don’t want the memorial known as “Silent Sam” to return to the campus in Chapel Hill.

READ MORE: Six police cars forced 10 Black college students to walk back to IHOP after being falsely accused of not paying

Television footage and videos posted to social media showed several punches thrown and at least one man handcuffed after he tried to burn a Confederate flag taken from another man’s hands.

None of the seven people arrested was affiliated with the school, Chancellor Carol Folt said.

“Silent Sam,” erected in 1913, was torn down Monday during a protest. It’s now in temporary storage.

Folt said there have been at least 35 demonstrations about the statue in the past several years, and while she would prefer a safer, more secure location than a main campus quad, the university hasn’t decided what to do with the monument. Police surrounded its empty pedestal with barricades Saturday.

The chancellor only promised a “sustainable, lawful solution” during a conference call with reporters, where she also acknowledged there were “very tense moments” during Saturday’s demonstrations.

“I won’t be rushed into that,” Folt said of Silent Sam’s fate.