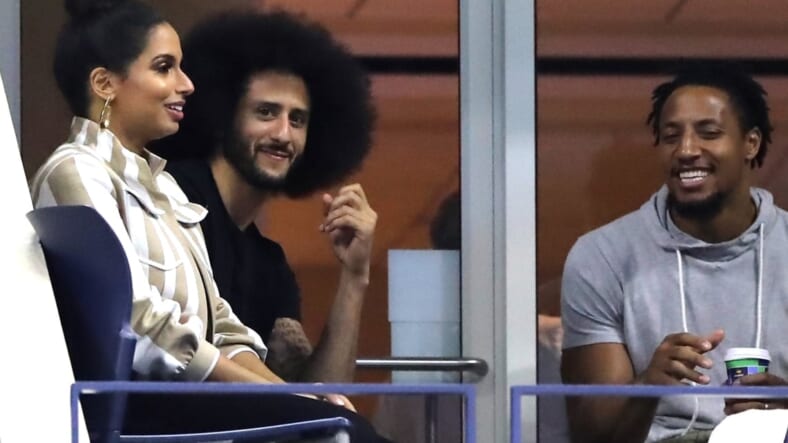 on Day Five of the 2018 US Open at the USTA Billie Jean King National Tennis Center on August 31, 2018 in the Flushing neighborhood of the Queens borough of New York City.

A day after the NFL’s request to throw out Colin Kaepernick‘s claims that owners conspired to keep him out of the league was denied, the former 49ers quarterback and ex-teammate Eric Reid received huge ovations from the crowd at Arthur Ashe Stadium during Serena Williams’ 6-1, 6-2 win over her sister Venus at the U.S. Open.

Kaepernick has become the face of the new civil rights movement ever since he began protesting police brutality by kneeling during the national anthem to draw attention to the oppression of people of color in the U.S.

“I think every athlete, every human, and definitely every African American should be completely grateful and honored how Colin and Eric are doing so much more for the greater good, so to say,” Serena said after her match Friday night.

“They really use their platform in ways that is really unfathomable.” She added: “I feel like they obviously have great respect from a lot of their peers, especially other athletes, people that really are looking for social change.”

After the applause, Kaepernick’s and Reid’s attorney Mark Geragos took to Twitter to note that: “the poor souls who don’t realize [Kaepernick and Reid] are American Icons are about to be given a rude forearm shiver.”

Kaepernick and Reid have been unable to find work in the NFL because of their anthem protests and both players have filed collusion grievances against the league, citing a conspiring to keep them out because of their practical beliefs.

On Thursday, an arbitrator ruled Kaepernick had enough evidence for his suit to proceed in a trial-like format, N.Y. Daily News reports.

Read More: What we know about shooting at Fla., gaming tournament