He jumped into the campaign fray Saturday in Anaheim, Calif., to remind voters to cast ballots for Democratic congressional candidates. 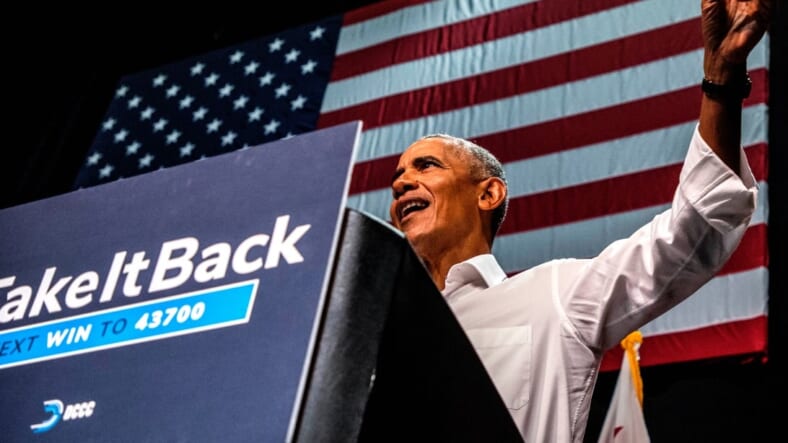 Barack Obama is continuing his return back into the limelight to push voters to show up at the polls.

The former president jumped into the campaign fray Saturday in Anaheim, Calif., a former Republican stronghold, to remind voters to cast ballots for Democratic congressional candidates in the upcoming midterm elections, ABC News reported. Until recently, the nation’s first Black president has kept a relatively low profile, working with his grassroots foundation.

But as Democrats express fury and disappointment at policies pushed by the Trump White House and Republican Congress, they are working hard toward making sure voters are heard.

Obama’s comments came a day after he accused President Trump of “capitalizing on resentments that politicians have been fanning for years.”

“If we don’t step up, things can get worse,” Obama warned the crowd in Anaheim on Saturday. “In two months, we have the chance to restore some sanity to our politics. We have the change to flip the House of Representatives and make sure there are real checks and balances in Washington.”

Republicans, however, said Obama’s appearance was only fueling their cause.

“Their base can go have a rally but it gets my base more motivated,” Fred Whitaker, chairman of the Orange County, Calif., Republican Party, told ABC. “It works for me,” Whitaker said.

Right now, Republicans control both the U.S. House and the U.S. Senate.

On Friday, Obama said in a speech to students at the University of Illinois at Urbana-Champaign that Trump is a “threat to our democracy” who is banking on the “politics of fear and resentment,” The New York Times and other organizations reported.

Obama told the students that Trump is a “symptom” of a mentality among some elected officials, citing “a fear and anger that’s rooted in our past.”

The former president will be campaigning for Democrats over the next two months, until the general election, according to the Times.