Thomas Markle continues to show out in various embarrassing outbursts to the media. 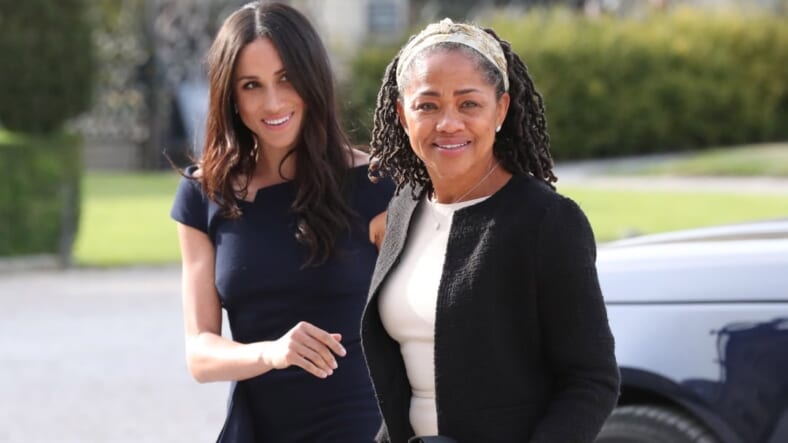 Meghan Markle and her mother, Doria Ragland arrive at Cliveden House Hotel on the National Trust’s Cliveden Estate to spend the night before her wedding to Prince Harry on May 18, 2018 in Berkshire, England. (Photo by Steve Parsons – Pool / Getty Images)

The world fell in love with the peaceful demeanor of mother-of-the-bride Doria Ragland during the royal wedding in May between Meghan Markle and Prince Harry, and now they may have another reason to admire the mom of the now duchess.

Ragland, a former social worker and yoga instructor who lives in Los Angeles, made a secret trip to England in July to comfort Markle, now the duchess of Sussex, while Markle’s father, Thomas Markle, showed out in various outbursts in the media, Newsweek reported.

News organizations are citing a tweet from royals reporter Omid Scobie, who says Ragland traveled to see the royal couple for an “extended stay” at their home in Oxfordshire, England, this summer.

ICMI: Sources confirm to @ABC @GMA that Duchess Meghan's mom Doria Ragland visited Prince Harry and her daughter for an extended stay at their Oxfordshire home this summer.
Doria is said to enjoy a close relationship with Harry and continues to be a pillar of strength for Meghan. https://t.co/1Iu8iU6Lbf

“Doria is said to enjoy a close relationship with Harry and continues to be a pillar of strength for Meghan,” Scobie tweeted on Friday.

“The visit was totally under the radar,” Newsweek reported another source told the Mail on Sunday. “Doria supported Meghan throughout a lot of the ordeal with Thomas.”

Thomas Markle, 74 and living in Mexico, has drawn negative attention to himself for scheduling appointments with the paparazzi and making disparaging comments about the royal couple to the press.

Last month, Markle told reporters that he hung up on Prince Harry after a heated conversation in which Harry allegedly warned him about being careful in his dealings with the press.

Markle acknowledged that Harry was right to admonish him for his behavior, but added that his response to Harry was not the most pleasant.

“Maybe it would be better for you guys if I was dead … then you could pretend to be sad,” Newsweek reported that Markle reported saying to Harry. “Then I hung up,” Markle added.

Meghan Markle banned her father from speaking at her wedding, an elaborate affair that included Serena Williams, Elton John and Oprah Winfrey.