REVIEW: 5 times ‘Nappily Ever After’ proved a Black woman’s struggle is real AF 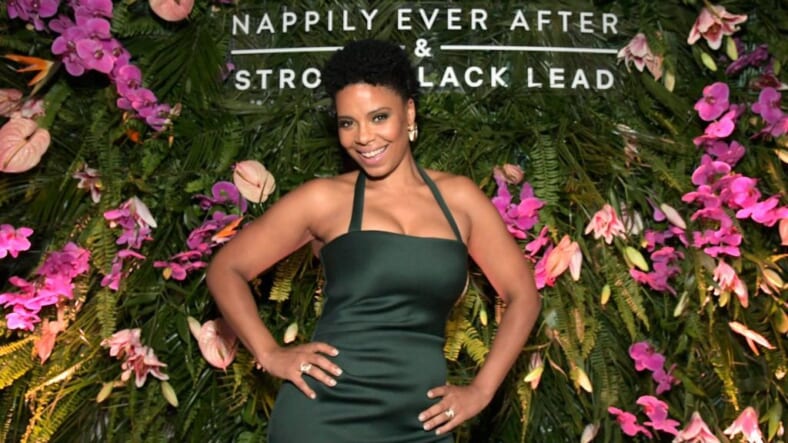 The much anticipated film, Nappily Ever After dropped on Netflix today and it’s sure to tickle you in more ways than one. As the title suggests, the movie that stars Sanaa Lathan is equal parts fun fairytale and horrifying reality that will leave any Black woman feeling frustrated, empowered, and understood in a way particular to us.

The film, adapted from the 2001 novel by Trisha R. Thomas, was co-written by Love & Basketball director, Gina Prince-Bythewood, and follows Violet (Sanaa Lathan), a woman who seems to have it all together. Except, behind the scenes, she really doesn’t have a clue about who she is. Whether you blame society’s rejection of Black beauty, or her overbearing mother (Lynn Whitfield), Violet has spent most of her life reaching for an unattainable picture perfection in every aspect of her world from her job, to her man, to her hair.

READ MORE: Black Twitter rejoices over Sanaa Lathan in the trailer for ‘Nappily Ever After’

When it all comes crashing down, she’s forced to face her demons and learn to love herself; naps and all. Her road to self-discovery is one every Black woman I know can relate to on some level. Several moments in the film could have been cut right out of our own memories, shedding light on several of the unspoken rules of being a Black girl.

Here are five times Nappily Ever After proved our struggle is real AF:

1. Pools are not for swimming.

The movie opens with Violet as a child, remembering what it was like as the only Black girl at the country club pool. Wishing she could run around and act a fool like her white peers, Violent knows she’s not allowed to freely frolic in the pool without a care.

“Like most Black mothers, mine was consumed with the presentation of her child,” she says while revealing that her perfectly pressed hair prohibited her from joining in on the fun for fear that her natural locks would scare her friends away and piss her mother all the way off.

How many times can you recall risking a beating if you got your hair wet as a child? How many hours did you sit at your mother’s feet while she brushed, braided or straightened your ringlets into order when all you really wanted to do was play outside or get an extra hour of sleep?

Violet’s impressive career comes with an assistant whose daily tasks include a detailed rundown of the weather forecast so the boss is never caught-off guard by high humidity or a unexpected rainstorm. Of all the things for a grown woman to be afraid of, rain is at the top of her list and we all know why.

When it comes to the fantasy aspect of the film, this little detail is delicious. Who wouldn’t enjoy a white girl having to concern herself with the intricate details of meteorology, climatology, or atmospheric physics all for a Black woman’s pleasure?

Watching Violet getting it on with her smoldering hot boyfriend (Ricky White) should be all fun and games, but instead it’s a calculated dance orchestrated to keep his hands off of her head at all costs.

This leads her to lose out on the intimacy other couples enjoy and prompt her to get on top right when things are getting good so she can make sure her time in the sack doesn’t disturb her blowout.

4. A hairdresser has the power to ruin your life.

White women have the luxury of popping into whatever salon has an open chair without worrying about whether or not they will end up on the brink of suicide by the end of the appointment.

When unruly kids spray her with a water hose, Violet is forced to visit a salon she has never been to and all hell breaks loose when someone swaps the shampoo with relaxer. Anyone who has ever experienced the tantalizing tingle of a chemical relaxer knows that there is a chance it can turn into a brutal burn from the depths of hell. Its the stuff our nightmares were made of before we woke up to the joys of natural hair.

The sexiest scene in the film doesn’t come from Violet’s bedroom escapades or a steamy hook up. Instead, it’s when a prospect (Lyriq Bent) busts out his own concoction and starts oiling her newly shaven scalp. Watching this man run his hands over her head is orgasmic to say the least and if you’ve never gone short enough to know what fingers feel like when a partner is gliding his/her hands all over your scalp, you just have NOT lived.

There’s nothing more intimate than knowing someone sees and appreciates your natural beauty. It’s enough to make your toes curl tighter than your tresses.

“Nappily Ever After” is currently available on Netflix.