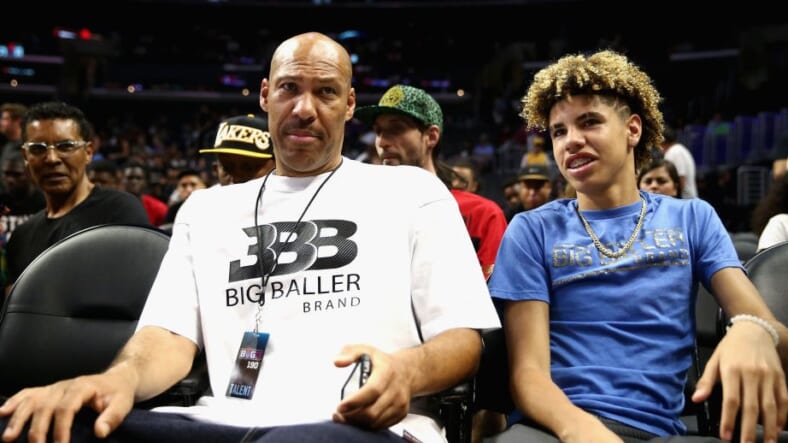 (L-R) Lavar Ball and LaMelo Ball look on from the audience during week eight of the BIG3 three on three basketball league at Staples Center on August 13, 2017 in Los Angeles, California. (Photo by Sean M. Haffey/Getty Images)

It had been a second since we had heard from one of the members of the infamous Ball family, but on Monday, the mercurial basketball family fought its way back into the headlines.

LaMelo Ball, the youngest brother of Los Angeles Lakers guard Lonzo Ball, slapped an opposing player and sparked a benches clearing brawl during a game in Lithuania on Monday.

Ball, 17, who was pulled out of high school by his father LaVar Ball last year and signed with a Lithuanian professional league, was playing for “Team USA” – not the U.S. National Team, but a team of American players from Lavar’s Junior Basketball Association. During the third quarter of the game against Lithuanian club Dzukija, Ball drives to the rim on guard Mindaugas Susinskas and was fouled before getting off a shot.

Ball appears to shove Susinkas on the follow through, to which the Lithuanian responds by tapping Ball on the back of the head.

Ball responded the way most reasonable people would: He slapped Susinskas in the face.

Both players squared off and threw punches before both benches emptied. That sparked more pushing and shoving as both Ball and Susinskas were ejected.

LaMelo and his older brother LiAngelo Ball – who Lavar pulled out of UCLA before he played a game at the school after he and two teammates famously got in trouble for shoplifting in China – both played in Lithuania in the past year for the club BC Prienai.