Today is your last chance to register to vote in these 17 states- Are you ready for the midterm elections?

In you want to talk with someone face-to-face and register, this is your last shot.

Today is a key day for voter registration in 17 states, where a lot is at stake for Black folks.  If you’ve slept on midterm elections before, now is the time to care.

Whether it’s choosing between the first African-American governor in Florida or Trump-favorite Ron DeSantis, or voting for ballot measures that could change the way money is spent in schools– local politics is king this year.

“The 2020 census is coming up, and many of the state legislators and governors we elect this fall will be the folks in power when it comes time to divvy up the districts,” says BlackHER’s “The Black Woman’s Guide to the 2018 Midterm Elections,” in a post about gerrymandering.

“The only way we’re going to get justice is to get power. And the only way to get power is to elect representatives that have our experiences,” says Jocelyn Harmon, CEO of BlackHER.  “We have to come out in even larger numbers to make our voices heard.  The ‘blue wave’ is not coming if black women and men don’t go vote.”

There are 17 states where today is the last day to register to vote in-person.  You may still register online in some places, but if you want the peace of mind of going in person, take note. 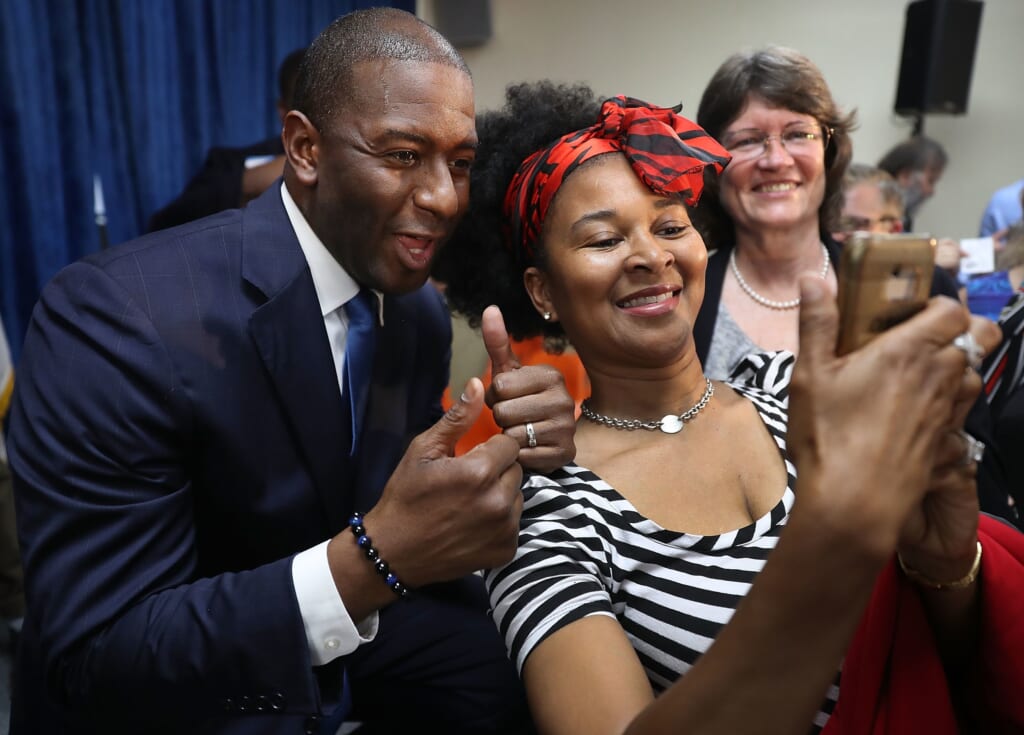 ORLANDO, FL – AUGUST 31: Andrew Gillum the Democratic candidate for Florida Governor poses for a picture with Cynthia Harris as he greets people during a campaign rally at the International Union of Painters and Allied Trades on August 31, 2018 in Orlando, Florida. Mr. Gillum is facing off against his Republican challenger Rep. Ron DeSantis (R-FL) in the November 6th election. (Photo by Joe Raedle/Getty Images)

In addition to the historic governor’s race between Tallahassee Mayor Andrew Gillum and Ron DeSantis, Florida has a Voter Restoration Amendment on the ballot.  1.6 million former felons could get the right to vote back across the state- a big rebuke of voter suppression- if the majority of Florida voters agree.  (Last registration day online/in-person/mail-in Oct. 9)

In Michigan, voters could get marijuana legalized.  A new ballot proposes weed get a pass for recreational usage for people 21 and older.  According to local analysis, black men carry the burden of marijuana arrests and are four times more likely to be arrested than other Michigan residents. (Last registration day Oct. 9. No online registration.)

In Georgia, Minority House Leader Stacey Abrams is running for governor in a hotly contested race against Brian Kemp.  Abrams has promised to be a “public education” governor and if she wins, would be the first black woman governor in U.S. History. (Last registration day online/in-person/mail-in Oct. 9)

Senator Jeff Flake (R-AZ), the man who held the Brett Kavanaugh vote up for an FBI investigation, is retiring.  As the contentious confirmation hearing, many are watching to see if there will be backlash in the form of a Democrat being elected. (Last registration day online/in-person/mail-in Oct. 9)

In Texas Senator Ted Cruz is facing off against Democratic Rep. Beto O’Rourke.  Cruz is ahead but many are still betting O’Rourke can turn the traditionally red state, blue.

Also keep an eye out for Adrienne Bell, a Democrat and teacher running for Congress. (She’s endorsed by The Collective PAC). (Last registration day online/in-person/mail-in Oct. 9)

Other states on their last day of in-person registration include:

And as a bonus, make sure you’re registered by October 16 to vote in Maryland.  That’s where former NAACP President, Ben Jealous, is running for Governor.  If he wins, he’d be the first African-American governor in the state’s history.

Voter registration is easy.  You can visit Vote.org.

Learn more about theGrio’s stance on the midterm elections’ important issues impacting Black America by reading our manifesto and following the #BlackVoterPower hashtag.