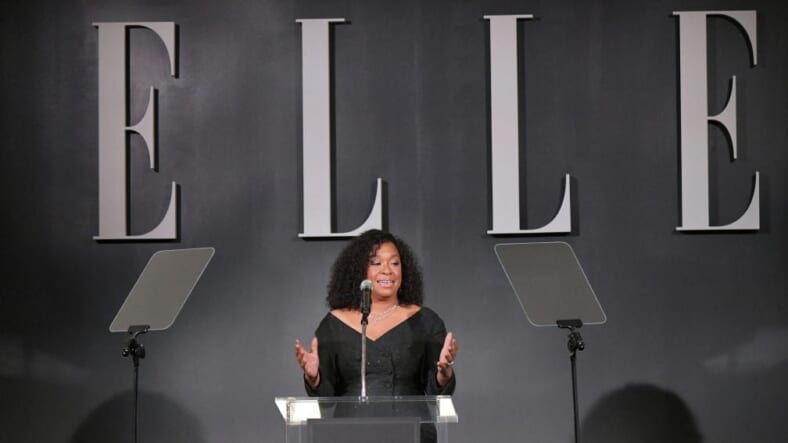 Shonda Rhimes is finally opening up about her lucrative Netflix deal, and she’s not afraid to brag about it with the hopes that doing so will inspire more women to step into their purpose the way she did.

“I will not hide. I am going to brag. I am the highest paid showrunner in television,” Rhimes said Monday evening while speaking at ELLE’s “Women in Hollywood” event.

While Rhimes didn’t go all out and specify an exact dollar amount, she did clarify that her recent nine-figure deal with Netflix came with a salary much higher than what was previously reported.

“The other day I came to this conclusion that men brag and women hide,” she told the audience. “And on behalf of women everywhere, in the name of not leaving my sister hanging, I will brag.”

Rhimes credits her Grey’s Anatomy star Ellen Pompeo, who presented her with the award, for inspiring her to make the bold disclosure. Earlier this year, Pompeo negotiated her own $20 million–per–year deal to become TV’s highest-paid dramatic actress.

“She said she was powerful and she said she deserved it,” Rhimes explained. “And there was some blowback. And there should not have been. I have seen a thousand articles like that from men, but she’s a woman and she shouldn’t say things like that. She should hide.”

If you’ve been hiding or playing small and need a little boost to be more vocal about your worth, check out an extended excerpt from Shonda Rhimes’ passionate acceptance speech below.

She’s makes no apologies for her success and is challenging all of us – especially Black women – to do the same.

Thank you to @ELLEmagazine for such an amazing night. To the other honorees, you all provided incredible moments of inspiration that I will always carry with me. #ELLEWIH pic.twitter.com/rT3omdyvzC

“In a world in which women of all colors are constantly forced to battle with men for equity and inclusion, we [Rhimes and Ellen Pompeo, who presented her with her award] had the good fortune to work in an environment that we had nurtured and built with enough of our sweat and tears over enough years that we no longer needed to battle men to get to the top of a mountain. We just built our own mountains and then we realized all we simply had to do was equalize and include one another.

I tell you this for two reasons. One, I’m awesome. And I work with a ton of other equally awesome women. And women do not brag enough. The other day I came to this conclusion that men brag and women hide. Even when they don’t deserve to brag, men brag, like Trump and Kavanaugh. When men do deserve to brag they are good at it. They do it so well. Men brag about everything. Even things that aren’t things.

A little while ago in an inspiring article, Ellen [Pompeo] told the world she was the highest paid woman in dramatic television. She did not hide. She bragged. She said she was powerful and she said she deserved it. And there was some blowback. And there should not have been. I have seen a thousand articles like that from men, but she’s a woman and she shouldn’t say things like that. She should hide. I was really mad on her behalf but then what did I go and do.

Ryan Murphy, bless your amazingly talented heart. When Ryan, who is here, made his amazing deal with Netflix what did he do? He shouted his salary to the world and he did this gorgeous cover shoot for the Hollywood Reporter. He deserved every minute of it and I applauded him. When I made a deal with Netflix, I let them report my salary wrong in the press and I did as few interviews as possible. Then I put my head down and worked. In other words, I hid. I’m getting this award for inspiring other women and how can I inspire anyone if I’m hiding?

So, let me take a deep breath. And on behalf of women everywhere in the name of not leaving my sister hanging, I will brag. I got to say this is harder than I thought. I am the highest paid showrunner in television.

How’s that for girl power? I’m going to send for a little Black girl magic. The point is that we need to set an example. I am and we are awesome. Which is another way of saying we have power and we are powerful women and when we say we have power we are really saying we deserve to have power. We deserve whatever good thing it is we are getting. Demanding what you deserve can feel like a radical act. We live in a world in which only men are allowed to scream, cry, and demand and do this in places like senate hearings.

Brag about yourself in the comments below. #MondayMotivation pic.twitter.com/nwuSIDho05

Which brings me to my second reason for saying all this. Throughout my career, and every turn, and every step, I have found at the heart of every last one of my successes profound and amazing women with whom I have the good fortune to work. With whom I’ve formed incredible sisterhood bonds. Women so different from me who have changed who I am in my core. I think of the actors, Ellen, Sandra Oh, Amy Brenneman, and Kerry Washington. I think of writers like Krista Vernoffand and Jenna Bans. I think of directors like Debbie Allen. The smart women who forced me into my nice clothes like Dana Asher or Orsolina Garcia. All of the extraordinary women I work with at Shondaland. Channing Dungey at ABC. The unbelievable posse of women in power and friendship with the women of Time’s Up. My nanny who is basically the single most important working woman on the planet.

At every turn, there are women, good women, great women, leaning on and learning from and leading one another. That inspiration, hard work, and community make it feel a little easier to fight this good fight. I tell you this story of Ellen and me because I want to make a point. This point. The struggle we are in the midst of that feels so hard is hard but it is not impossible. Not if you have a community. A real one. A supportive one. And tonight we have one another but there are women out there who are struggling alone. Who do not have other women on their set. Who may be the only person of color in their company. Who may be older than you are used to, or younger, or browner, or less abled. Women you have forgotten to include in your conversations and your world. Be a person who pulls other women, new different women, into your circle. Widen your circle to hold more people. Lose your judgments of who someone is based on what you’ve heard or what you assumed. Make some friends. Find some new sisters. Come together, work together, brag together, be powerful together, and whenever we can we should be lifting other women up. Because lifting someone up is what lifts us. That is the point.”

Amen and thank you, Shonda.