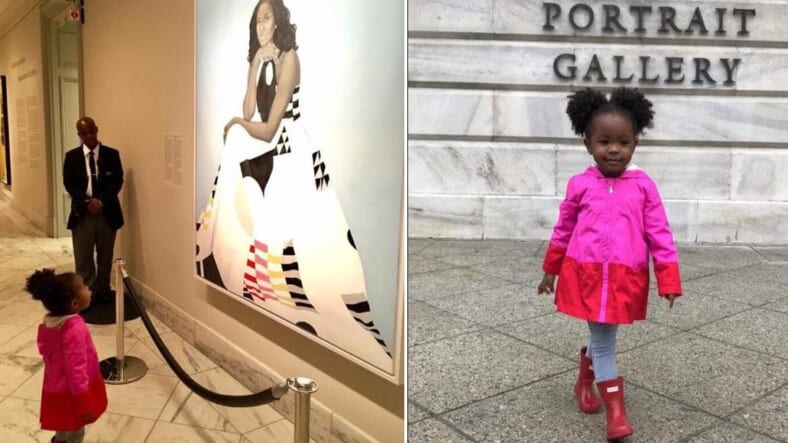 The little girl who captured our hearts when she was awe-struck by the Presidential portrait of Michelle Obama, did it again after posting a picture dressed up as the former First Lady for Halloween.

Parker Curry is making hearts melt yet again posed as pretty as can be in a dress that resembles the one Obama wore in the famous National Portrait Gallery artwork by Amy Sherald.

Curry, now three years old first went viral earlier this year when she was caught staring at the painting in what appears to be wonder. She later got to meet the first lady and the two danced and seemed to have a great time together.

So when it came time for Halloween and Curry’s mom Jessica asked the little tot what she wanted to be, there was no doubt in her answer.

“Flat out. No hesitation. Half of a second later: ‘I want to be Michelle Obama,’ and I was like, whoa,’ Jessica told BuzzFeed News.

“I thought she was going to be like, ‘I want to be Elsa’ or some other character like that.” She shared the picture on her twitter account and even caught the eye of the first lady who tweeted:

“You nailed the look, Parker! I love it!!!!” accompanied by a heart emoji.

Getting another nod from Mrs. Obama has to be a great feeling. Previously Jessica told the Grio:

“We feel honored and humbled that this picture of Parker has gone viral and inspired and touched so many people. We also feel honored that Mrs. Obama wanted to reach out and talk to her, spend time with her, and encourage her in the same way that I do. She told her that she was beautiful, she was smart, and she could be whoever she wanted to be. It was a wonderful experience and one that I am so looking forward to sharing with Parker when she can fully grasp it because right now, she’s just like, ‘Oh I saw the Queen.’ “

Mom Jessica said Alisha Welsh, of Magnolia Lake Children’s Clothing, recreated the dress. And when Parker finally put it on, she felt like the princess that she is.

“She twirled in it. She danced in it,” Jessica said about the dress. “Running up to the houses she would pick up the front of the gown so she wouldn’t get it dirty. It was so cute.”