EXCLUSIVE: Hero security guard shot by police was expecting second child and now his girlfriend and family search for answers

In an exclusive interview with theGrio, attorney Lee Merritt explains how Jamel Roberson became a hero as he was killed by police while trying to keep others safe. 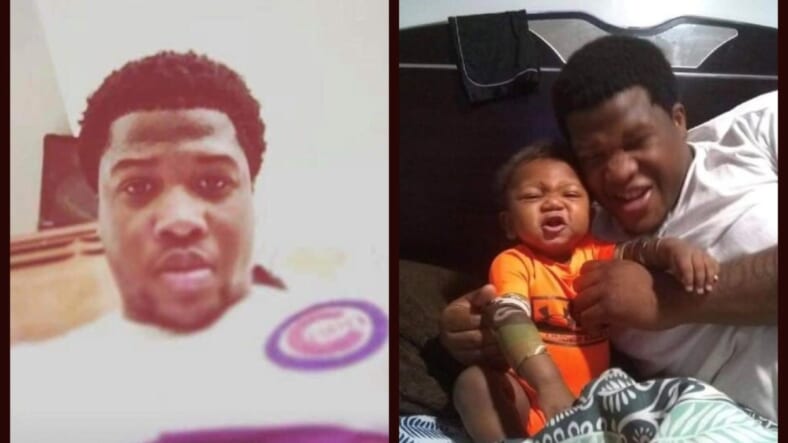 Jemel Roberson is survived by his 9-month old son, Tristan; Tristan’s mother, Avontea Boose, who is currently expecting their second child; and a host of family and friends. (Photos courtesy of Lee Merritt)

The family of Jemel Roberson, the 26-year-old armed security guard who was shot and killed by a suburban Chicago police officer last weekend, is searching for answers to why he was killed without warning.

“We’re trying to get the name of the officer, the record of the officer and access to body cam footage,” Lee Merritt, the attorney for Roberson’s two children said in an exclusive interview with theGrio on Wednesday.

“To know that the Cook County District Attorney’s Office is possibly looking into this and handling this investigation; to know there is an independent non-Midlothian law enforcement agency looking into the shooting, there’s just certain stuff that needs to take place,” he added.

Roberson was a bouncer at Manny’s Blue Room in Robbins, Ill., which is located in Chicago’s south suburbs. By all accounts, he was a model citizen who was simply trying to make a life for himself and his growing family. He had been working multiple jobs to support his 9-month old child.

READ MORE: Black security guard subdues gunman and gets killed by police arriving on the scene

He had recently picked up a job working security at a school and he also played the organ at New Spiritual Light Baptist Church in Chicago. Roberson and his girlfriend, Avontea Boose are expecting their second child, which they were waiting to announce to his family prior to his death.

“As you can imagine, it is a pretty devastating time to announce this pregnancy – she is three months pregnant – and they were planning to tell his mom they were expecting again,” Merritt said. “He had just started working a job doing security at a school. His family is devastated.”

No video or pictures from the incident have been made public as of yet and the investigation is still ongoing. On Tuesday, the Illinois State Police released a statement and claimed that the officer gave Roberson “multiple verbal commands” to drop his weapon and get on the ground before killing him. They also said that Roberson was wearing nothing that indicated that he was a security guard.

Witnesses at the scene said that Roberson was wearing a white baseball cap with the word “security” across the front and multiple witnesses claim that the officer gave a half-hearted warning before shooting him. None of this sets well with Merritt who sees the fallen Roberson as a hero.

READ MORE: Newly elected Democrat under fire for saying Tennessee is racist and Republicans are uneducated

“A lot of people are calling Jemel a hero for what he did that night – for stopping the shooter at the bar,” Merritt said. “He went further and subdued them as armed suspects who had already fired in his direction.

On Tuesday, Jemel’s mother, Beatrice Roberson, filed a $1 million civil suit against the still unnamed Midlothian police officer who shot her son. Merritt is planning a separate suit on behalf of Roberson’s children.

“Jemel was trying to save people’s lives,” he said to WLS-AM 890. “He was working security because a shooting had just taken place in the establishment. So, he was doing his job and holding on to somebody until police arrived,” he added. “The police officer, our feeling is, did not make the proper assessment and fired and killed Jemel.”

For Lee Merritt, this feels like a case of déjà vu. He is also the attorney for the family of Botham Jean, who was killed in his own home in September by former Dallas Police officer Amber Guyger. Jean’s parents, Bertrum and Allison Jean, are suing the city of Dallas over his killing and he sees far too many parallels.

“I was speaking with Botham’s mom about this incident and she made it a point that she would really like to speak with his family,” Merritt said. “She asked the question ‘how is this not terrorism?’ I had a difficult time responding to that.

“We’ve hit rock bottom with police brutality when someone is sitting on their living room couch and they’re killed and then you took someone who was actually behaving as a security officer and diffused the situation,” he continued. “He was literally the ‘good guy with a gun’ – following the mass shooting a week prior – and he was killed for it.”

The “good guy with a gun” narrative, a line often parroted by the NRA and the Republican Party, often only applies to white shooters. The NRA has yet to offer any support of Roberson, and was notoriously silent when Philando Castile – a licensed gun owner – was pulled over and killed in 2016 by a Minnesota police officer.

Earlier this year, the NRA claimed that the shooting in a Tennessee Waffle House could’ve been prevented if a customer had a gun, despite it being stopped by an unarmed Black man named James Shaw. Merritt said that when people talk about things such as gun control, police need to be included in that discussion. Not just in terms of curtailing mass shootings, but to also learn when not to fire the shot.

“I think that’s the least that we can ask in both Jemel’s case and Botham’s case,” he added. “Don’t shoot first and ask questions later.”