Find out what these actors learned from Viola Davis. 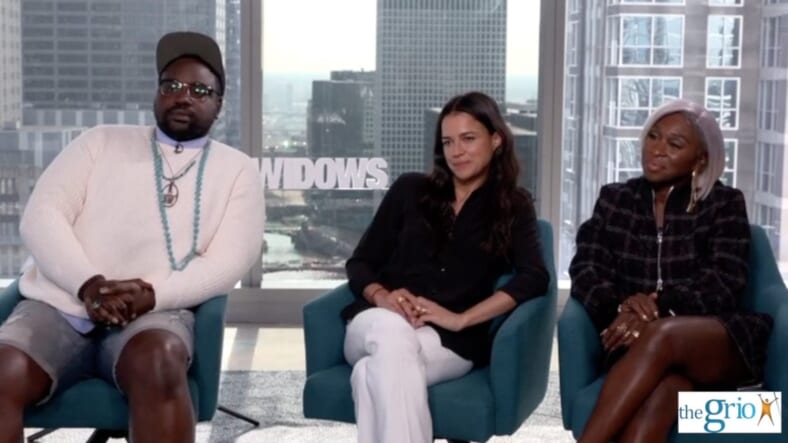 While Viola Davis is the driving force in Steve McQueen‘s latest film, WIDOWS, there’s an all-star supporting cast that delivers some extremely powerful performances as well.

TheGrio caught up with Brian Tyree Henry, Cynthia Erivo, and Michelle Rodriguez to find out how they handled the heavy tone of the stirring heist flick and what they learned from working with Viola Davis.

“It’s a complete antithesis of what we know her for. This is not Annalise [Keating]. This is not Fences. It’s a completely different side of her,” says Brian Tyree Henry. “She’s running around with her natural hair in this movie. She’s married to a white guy in this movie who happens to be Liam Neeson. She’s doing these things that are just completely different. You’re just excited to be on that set to see that she’s doing something new for her too… It was fantastic. It was masterful.”

According to Cynthia Erivo, just being in Davis’ presence left her in awe.

“You kind of just have to stand in a room with her and you’re probably learning something. She doesn’t have to say anything. Even in her quiet moments, there’s something about her  stillness that is unlike anything I’ve seen. I don’t know there’s anyone who can do what she does,” says Erivo.

“I was just pleased to be in the room to be honest because I felt like watching her process a line or try to get it with the right cadence and then to see her be hard on herself when something was not quite right. It’s like, ‘You’re you. It’s right every time.’ She doesn’t realize that she’s brilliant. Even when she thinks she’s making a mistake, it never is. It’s just a different take on it.”

Michelle Rodriguez has tons of film roles under her belt, but she admits she felt intimidated by the other talent in the room.

“Everybody was very open and sweet and humble. I’m here with monsters in the game so I was intimidated at first. Am I gonna live up to this? I make action movies. Am I gonna be good enough? Am I gonna be able to show my truth when it’s time to be vulnerable because– let’s keep it real– I have spent most of my career just throwing on my army suit and just military plowing down war style. That’s easy to me,” she explained. “Having to lay bare and put your heart out there…that unconditional love thing doesn’t come easy. I was just really supported and I felt like I was always in a learning environment and I felt like we were doing something we all believed in.”

Brian Tyree Henry admits that the women in the cast did most of the hard work but his scenes with Viola Davis left him spent. Fortunately, he had a new city to explore when he wasn’t on set.

“The men and the women were pretty separate. I’m not gonna lie because they do the heavy lifting—literally and metaphorically. Our duty was to make sure we were supporting what they were doing. I didn’t really get to interact with the women that much in this movie, or should I say THE woman in this movie. After that I was like, ‘I’m tired. This is hard.’ There was still a levity when we did see each other and it was great.”

Check out the full interview, above.