Stevante Clark doesn’t want to be defined by mental health challenges: “I hope they don’t judge me on the past” 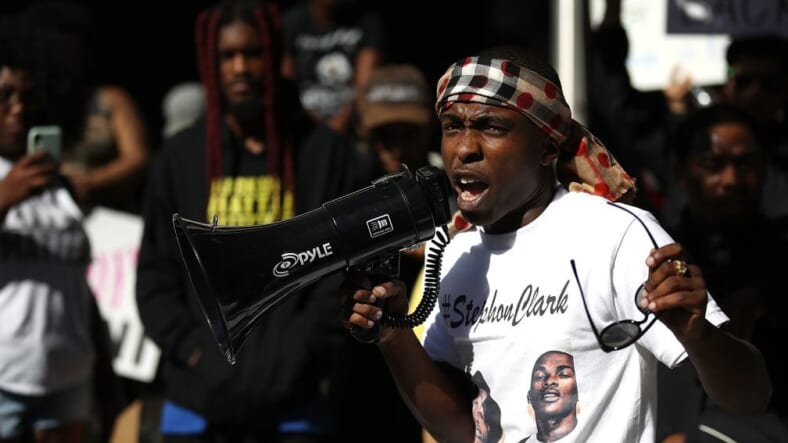 Stevante Clark has made many headlines in his passionate quest to secure justice on behalf of his brother Stephon Clark, who was gunned down by Sacramento police.

According to the Sacramento Bee, Stevante Clark sang gospel songs with all his heart as he perused the good book from his cell phone at the Calvary Christian Center in north Sacramento last week.

“What do you label me as? I lost my brother in a horrific way,” Clark said from his grandmother’s Meadowview home.

READ MORE: Dallas mom calls for the firing of school employee who called her son a monkey

Clark had a word for those who criticized him for his outcries, after his brother was fatally shot. Some called him “crazy” and said that his behavior added to a negative family narrative. His brother, Stephon Clark, was shot following a 911 call that said he was breaking into neighborhood cars. Police gunned him down trying to get into his grandmother’s home from the backyard, assuming that he had a gun in hand that turned out to be a cell phone.

“I’ve done some f—– up things , but I’ve tried to atone for things I’ve done wrong. … This image of an angry black kid, me, is just something that I would like to escape because I’m not angry. I don’t know why I have to be labeled as crazy or angry or mentally ill, but I take it for what it is. I accept there are things I cannot change.”

“A lot of people were talking about him in a negative way,” said Larry Craig-Arriba, a friend and mentor to Clark.

“I think these people who are talking had never experienced what he was going through. I think it was a mental breakdown, not an anger problem. … I think we shouldn’t turn our back on people with mental health issues. Stevante is just one of thousands.”

His brother’s death fueled some mental health challenges. Also his step-brother De’Markus McKinnie was killed in 2006, in an accidental shooting when Clark was 12.

The family trauma become all too overwhelming for him.

“When Stephon died, I had those emotions hit me, like I have nobody,” Clark said. “My brothers were the ones I wanted to get old with. Those are my friends. … Those are my go-to guys.”

Prior to 2018 Stevante Clark didn’t even have a criminal record. But right after his brother was killed he was in jail and had been in a mental institution – all within a few weeks of the shooting.

Now on the road to recovery, he’s working to turn the tables and enter the political realm.

Just recently Clark, 256, filed the paperwork with the California Secretary of State opening two campaign finance committees, one citing a 2020 mayoral bid in the next general election, according to the Sacramento Bee.

“Even though I did decide to run for mayor after the death of my brother,” Clark said, “I’m not making this about me in retribution and revenge.”

“Me running for mayor is my way of putting pressure on the city to do something for my brother’s legacy,” Clark said. “And also keep my brother’s name in their mouth because this is not something I want them to forget.”

“I felt like people were coming at me with their own agendas,” Clark said. “It was hard for me to know what was authentic. … A lot of people tried to help and do good things, and the ones I pushed away, I’ve apologized to and asked for forgiveness. And the ones that have stayed with me, I hope they don’t judge me on the past.”