The Anatomy of a Rap “Beef”: Here’s why Kanye West sent 80 tweets about Drake 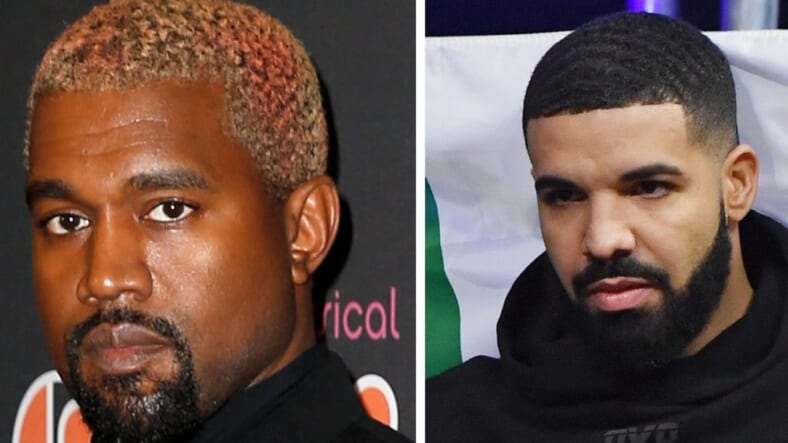 It’s been quite some time since we’ve seen a year of rap battles so plentiful and prominent. They’ve ranged from fantastic to pretty stupid (hello, Eminem), so why not tack on one more flare-up in the waning weeks of 2018?

Kanye West spent Thursday evening confirming why he’s probably the second-most prominent Twitter user who needs his account deleted by firing off a mess of tweets suggesting that Drake – a.k.a. Aubrey, a.k.a. Wheelchair Jimmy – is threatening the safety of the West family. The fusillade of f–kery is headache-inducing if you sit down and try to make sense of it all; even Travis Scott, whose name always seems to stay in folks’ mouths despite generally minding his Black-ass business, got dragged into it all.

A lot of folks believe that West and Drake’s “spat” started with the latter’s feud with Pusha T this year. Actually, the two men have had a quasi-Cold War with each other for some time, and the Pusha issue seemed to be the catalyst that dragged everything to the light.

Here’s an abridged account of what could be the moistest, most half-assed, estate-in-a-gated-community rap battle that ever was:

The first public shade: After several collaborations and mutual public praise, Drake seems to come at West for the first time in a 2011 with an interview with The Source. “My goal is to surpass everything he’s accomplished. I don’t want to be as good as Kanye, I want to be better,” said Drake. On DJ Khaled’s “I’m On One” from that same year Drake raps, “I’m just feeling like the throne is for the taking, watch me take it,” a decidedly unsubtle jab at West and Jay-Z’s Watch the Throne collaboration.

The (alleged) Rolling Stone diss: Drake apparently took shots at some bars on West’s “I’m In It” from Yeezus in a 2014 Rolling Stone interview. He got dragged so badly for coming at West that he denied he said anything and decided to give up magazine interviews altogether. It’s still hard as hell to get Drizzy to sit down for interviews.

Rich, light-skinned shit: After years of apparently getting along (at least in public), Drake drops “Summer Sixteen” in 2016, on which he brags about having a bigger pool than West. Yes, actual swimming pools. West responded by saying he has three pools. The world continues giving no shits.

West sneak-accused Drake of payola: In the 2016 on-stage meltdown in Sacramento that made me stop defending his ignorant ass, West took shots at Drake and DJ Khaled for working with radio to make their “For Free” collaboration the earworm that it was. Drake responded by saying he doesn’t understand why West would throw darts at him when they were supposed to be collaborating on an album.

Shit hits the fan in 2018: The beef went from cold and tough to sizzling medium-rare chop-house shit this year when Drake dragged West into his (also long-gestating) beef between Drake and Pusha T. Drizzy said in his “Duppy Freestyle” that he’s actually ghostwritten for West. In fact, the whole damn song was of more a shot toward West than Pusha, who returned to eviscerate Drake with “The Story of Adidion.” Drake got on LeBron James’ The Shop show and suggested that West betrayed him by leaking information of his hidden son to Pusha. West said he did no such thing; Pusha said he got the info from Drake’s longtime producer, Noah “40” Shebib.

…only for him to turn around with those same Twitter fingers and lose his rabid-ass mind via an 80-plus-tweet tirade that made every English teacher in America cry.

Drake called trying to threatened me

Even West’s wife, Kim Kardashian, got in on the fun by tweeting directly at the Canadian rapper to leave her damn family out of it.

@drake Never threaten my husband or our family. He paved the way for there to be a Drake.

The whole thing is asinine considering both men are arguably the world’s biggest rappers and they’re both shielded by cameras and bodyguards at all times. I don’t think anyone truly believes that Drake is on some Mexican cartel shit and that anyone’s family is in danger from his Canadian ass.

If I were being threatened by the dude who made “Hold On, We’re Going Home,” there’s no way I’d publicly admit it.