The polar vortex sweeping much of the nation is especially harsh on the midwest and though there's relief ahead , it's the coldest weather in recent memory for much of the U.S. 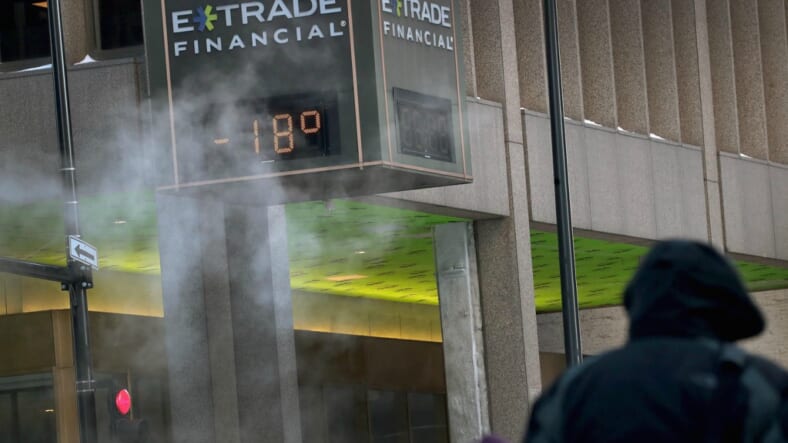 A commuter walks near a thermometer registering -18 degrees in the Loop on January 30, 2019 in Chicago, Illinois. Businesses and schools have closed, Amtrak has suspended service into the city, more than a thousand flights have been cancelled and mail delivery has been suspended as the city copes with record-setting low temperatures. (Photo by Scott Olson/Getty Images)

There’s an arctic blast bearing down over the U.S. and the Midwest is already feeling the frigid cold with record low temperatures hitting cities for the first year in decades, The Weather Channel reports.

According to a wunderground.com blog entry from Jeff Masters and Bob Henson, the culprit for the very cold weather is because part of the of the polar vortex is positioned over the Great Lakes, making a recipe for a chilly climate.

According to the outlet, Chicago’s O’Hare Airport was icy and experienced a dip to 23 degrees on Wednesday morning. This was reportedly their coldest temperature in 34 years. Back then the temp hit an icy 27 degrees.

On Wednesday, the weather in La Crosse, Wisconsin dropped in minus 30 degrees.

In Minnesota and western Wisconsin The National Weather Service reported that the weather on Wednesday was the coldest morning since 1996. It’s expected to stay below zero through Friday.

Des Moines, Iowa, dropped to minus 21 degrees Wednesday, their first temperature in the minus 20s since Feb. 4, 1996.

Parts of Minnesota, North Dakota, and even northeast Iowa have reported wind chills in the 60s below zero. It was reported that north of Ponsford, Minnesota hit minus 66 degrees wind chill Tuesday evening.

READ MORE: Jermaine Dupri vows to give families of murder victims a platform to speak during Super Bowl concert series

Record low temps are expected to hit the Twin Cities and Madison, Wisconsin, and once again plunge into the minus 20s in Chicago and Milwaukee, the outlet reports.

But on Thursday, it’s expected to be the coldest day of all along the Northeast Interstate 95 corridor. Lows may bottom out in the single digits from Baltimore to Boston.

The frigid weather is disrupting travel, causing school systems to close temporarily, and even the U.S. Postal Service — whose unofficial creed is to deliver the mail letting “neither snow nor rain nor heat nor gloom of night” stop them, isn’t risking its workers out in the cold, according to CBS News.

Meanwhile, in the unique cold snap, of course there’s social media to document it.

Sub-zero temperatures in Milwaukee cause these beer cans to explode and completely change the game of the super soaker. #PolarVortex pic.twitter.com/pXbxVDRue9

In Michigan, Hell has frozen over…

There’s a village near me called Hell, and today it’s actually frozen over. #PolarVortex pic.twitter.com/AoCOZRqGvR

In Chicago, it looks like the opening credits to a horror film.

Look at this amazing #sunrise over #lakeMichican and the #Chicago skyline on a historically cold day. #Chiberia #Chicagoweather #PolarVortex @accuweather @breakingweather pic.twitter.com/1LE1OrUUCI

In Florida, they just want to rub it in.

Temperatures are expected to move into the 40s in much of the midwest, bringing a virtual heatwave in comparison with the below zero weather the region has been experiencing.