WATCH: Cardi B overcome with emotion after GRAMMYs win: “Maybe I should start smoking weed”

The outspoken rapper could barely get through her acceptance speech. 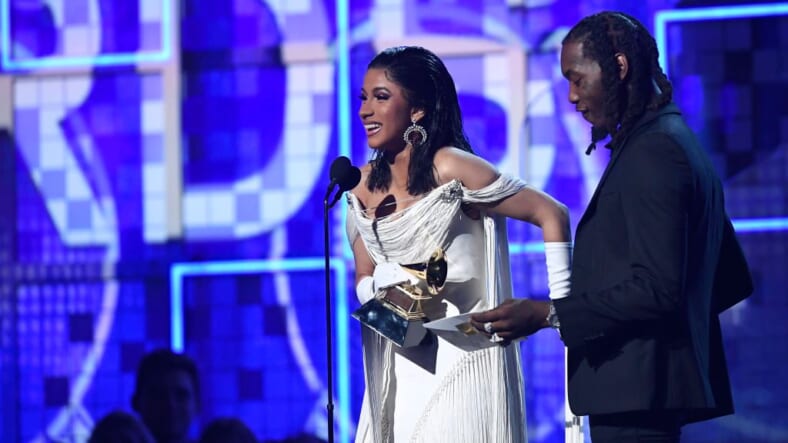 Cardi B is a GRAMMY winner!

The Bronx-born beauty picked up her first-ever GRAMMY award on Sunday night when she won Best Rap Album for her debut album, Invasion of Privacy. The win marks the first time a solo female artist has won in the category.

The usually outspoken artist was in rare form moments after she heard her name announced as the winner of the coveted category that included Travis Scott, Mac Miller, Nipsey Hustle, and Pusha T.

Cardi B was so overcome with emotion it took her a while to make it up to the stage, escorted by her husband, Offset. When it was time for her to deliver her acceptance speech, she was saying “I’m not ready,” before her hubby encouraged her to start talking. “I can’t breathe,” she said at first. “I’m sorry. I just…the nerves are so bad. Maybe I need to start smoking weed.”

She went on to thank plenty of people from her team as well as her husband and her 6-mnth-old ddaughter, Kulture.

“When I found out I was pregnant, my album was not complete. I had like three songs that I was for sure having, and then, you know…You know how it was,” she said nervously. “We had to get this album done so we could shoot videos while I’m still not showing and it was very long nights.”

The heartfelt speech and genuine emotion from Cardi B is not something we’re used to seeing and it made the moment even more touching. Check it out:

Earlier in the night, Cardi B took the GRAMMYs stage to perform her latest hit, “Money” after walking the red carpet in a pretty shocking ensemble.

Check out her performance:

#CardiB (@iamcardib) slaying the stage at the #GRAMMYs!!! pic.twitter.com/MbbhEic0nG

After the show, Cardi B took to social media to share her award with the late Mac Miller.

“I read an article that Mac Miller’s family said that if he don’t win, they want me to win, so I’m sharing this Grammy with you, motherf–ker! Rest in peace!,” she said in a video posted to Instagram.