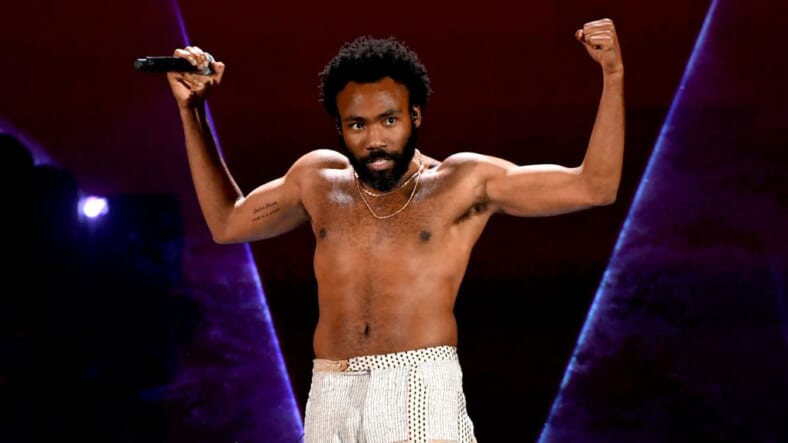 Childish Gambino just made history at the GRAMMYs but he wasn’t there to enjoy his big wins.

The singer, rapper, and actor who is also known as Donald Glover took home two of the big 4 awards of the night including Song of the Year and Record of the Year for “This Is America,” making history in more ways than one.

His win marks the first time a rap song has won Song of the Year at the GRAMMYs, beating out big names including Drake (“God’s Plan”), Kendrick Lamar and SZA (“All the Stars”), Lady Gaga and Bradley Cooper (“Shallow”), Ella Mai (“Boo’d Up”), Zedd, Maren Morris, and Grey (“The Middle”), and Brandi Carlile (“The Joke”).

His absence made history as well, marking the first time since 2008 that a winner in one of the Big 4 categories missed the ceremony (back when Amy Winehouse accepted her award from London.)

Ludwig Göransson accepted the Song of the Year award on Childish Gambino’s behalf and made sure to shout out 21 Savage while he had the mic. “He should be here tonight,” said Göransson of the rapper currently in I.C.E.’s custody.

The event was full of awkward moments, including an unexpected appearance by Drake who seemed to be speaking out against the GRAMMYs when his acceptance speech for Best Rap Song was cut short.

Plenty of stars were noticeably absent form the night’s festivities, including John Legend who opted to stay home and nap instead of getting dressed up for what’s known as “music’s biggest night.” There was no sign of stars like Rihanna, Jay-Z, or Beyonce either, and Kendrick Lamar was MIA despite his seven nominations.